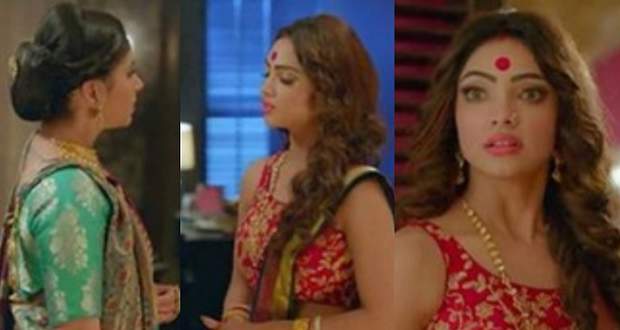 Suman takes up the call and asks her to check if Mohini’s necklace is at their place by mistake. Suman gets upset and hangs the phone.

She tells Prerna and other family members that Nivedita has accused Veena of stealing their ancestral necklace.

Anurag tries to stop Mohini from involving police in the matter. Mohini says she just needs to find out the real culprit. Anurag talks to himself and says that he fears something bad is going to happen.

Prerna calls Anurag to check if they are accusing Veena or just investigating about the necklace. Mohini asks Veena to send her the picture of the necklace.

Anurag’s manager comes to Basu Baadi. Anurag yells at him for coming to the house for discussing the problem. The manager tells Nivedita about the financial crisis caused by Mr. Bajaj.

Veena tells Prerna that she has Mohini’s necklace. Everybody gets tensed. The cops come and arrest Veena.