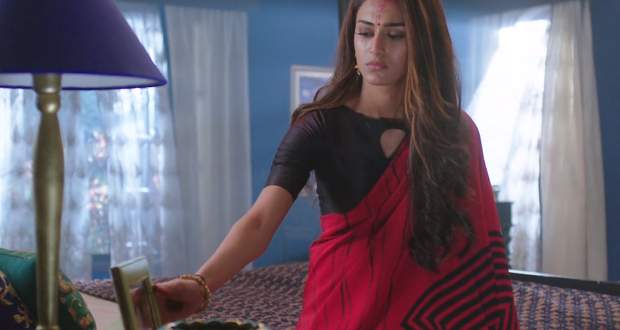 Today's KZK2 24 Oct episode starts with Komolika trying to hit Anurag’s car with hers while Prerna getting worried. Anurag’s car falls off the cliff and into the water.

Komolika declares if Anurag is not hers than he can’t belong to anyone else. After one month, Prerna is seen worshipping the Goddess at Basu house.

Anurag is still missing while Mohini doesn’t attend the Pooja. Meanwhile, Prerna prepares breakfast for everyone and is hopeful Anurag will return.

Mohini is worried about Anurag and blames Prerna for him being missing. At the same time, a car arrives and Anurag gets off it.

Prerna gets Sindoor on her forehead due to heavy wind. Later, she arrives in her room and feels Anurag’s presence really close to her.

Prerna sees Sindoor and remembers the last memories shared with Anurag. At the same time, Anurag arrives at the doorstep of Basu Bari and Moloy gets delighted to see him.

Mohini also arrives to meet her son while Prerna sees him from upstairs. Anurag reveals that he was in the hospital for a month and that he woke up a couple of days ago.

Anurag says that he is really thankful to the girl who saved him and at the same time, Komolika makes an entry in the Basu house with Sindoor on her forehead.