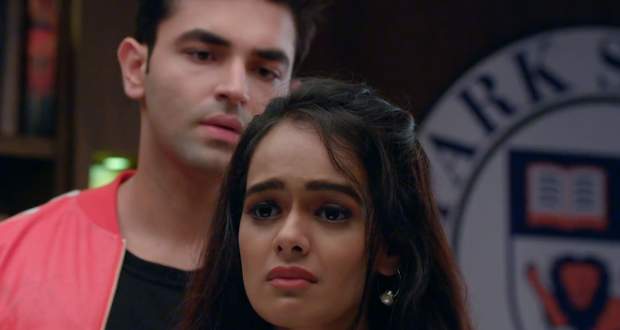 Today's KZK2 26 Sep episode starts with Priyanka changing her statement to save Samidha. She decides to reveal the truth as soon as she adopts Samidha.

Prerna and Priyanka leave to complete the adoption process but Prerna is forced to go to the college. She learns that Kaushik has locked herself and Kuki inside the library.

She calls Anurag and asks him to reach college. Meanwhile, Kaushik expresses his feelings while Prerna accuses Anurag of using Kuki to hurt her.

Anurag reveals that he never wanted to take revenge and doesn’t want to hurt Prerna. Meanwhile, Kuki gets hurt in the library and falls unconscious.

Kaushik takes Kuki to the hospital and Prerna and Anurag rush to the hospital. Kaushik reveals the story of how she got hurt accidentally and that he can’t even think of hurting her.

Prerna feels guilty for accusing Anurag while Komolika calls Anurag. Anurag learns that Komolika has earned some jackpot and is sure she has ruined someone else’s happiness.

Prerna reveals that the Aashram caught fire and Sneha died in that fire. Meanwhile, Kaushik learns that Kuki has gone to Coma and get shattered. Later, Prerna is heartbroken and crying as she misses her daughter while Anurag consoles her.

© Copyright tellybest.com, 2018, 2019, 2020. All Rights Reserved. Unauthorized use and/or duplication of this material without written permission from tellybest.com is strictly prohibited.
Cached Saved on: Wednesday 28th of October 2020 01:41:23 PM