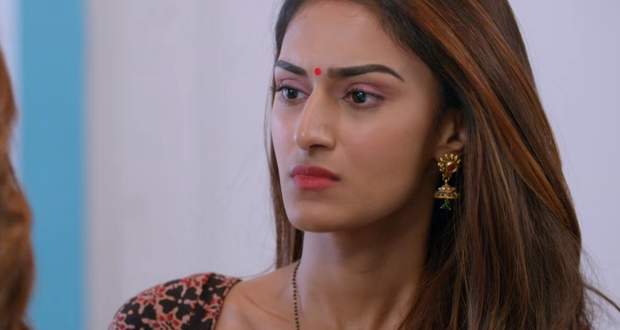 Today's KZK2 27 Dec episode starts with Komolika getting happy that Moloy is going out of the house. Later, Prerna climbs up the stairs without any problems.

She warns Komolika not to play any more games. However, Komolika puts oil on the stairs so that Prerna falls down the stairs. Meanwhile, Prerna brings herbal medicine for Anurag.

Later, Mohini slips on the oil and falls off the stairs. Prerna deduces that Komolika spilled oil on the stairs and wanted to harm Mohini.

Mohini is taken to the hospital and Prerna confronts Komolika about causing Mohini’s accident. Komolika says she wanted to have fun while Prerna gets a pain in her stomach.

Komolika wants to feel Prerna’s child and later wants her child to die. Prerna is in pain but Komolika doesn’t let her go out.

Prerna pushes Komolika away and shouts for the doctor. Later, the doctor tells Prerna that there are complications in her pregnancy and that she needs to avoid stress.

Anurag also asks Prerna to not take tension and just rest. Meanwhile, Komolika makes a plan and asks some doctors to talk against Prerna.

Anurag defends Prerna and later even gets into a fight with them. He forgets about the medicines he was supposed to bring for Prerna. Komolika takes Anurag along and says she trusts him.

Komolika tells Anurag that Prerna is in tension because of him as the society points fingers at her. She suggests getting her married.

© Copyright tellybest.com, 2018 & 2019. All Rights Reserved. Unauthorized use and/or duplication of this material without written permission from tellybest.com is strictly prohibited.
Cached Saved on: Saturday 4th of April 2020 11:08:09 AM