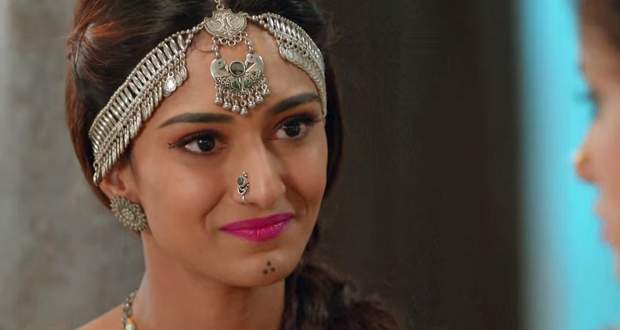 Today's KZK2 27 Nov episode starts with Shivani revealing that she saw Sonalika doing Kajal ritual and hence she is Komolika. Prerna decides to confront Komolika while Shivani tries to stop her.

Meanwhile, Anurag reads Prerna’s resume and gets flashes of memories from Switzerland. He also hears Prerna’s voice in his memory.

Komolika returns to get something from the room and Prerna follows her inside. She slaps her and confronts that she know her real identity.

Komolika denies accepting her true identity while Prerna entices her in revealing the truth. Later, Komolika accepts and says she is there to spoil Basus.

Komolika leaves and Ronit grabs Prerna by the neck in an attempt to kill her. Shivani hits Ronit on the head and Prerna and Shivani run away.

Prerna gets in her car while Komolika and Ronit also follow them. Komolika traps Prerna’s car and hits it with her own car.

Shivani sends Prerna in an auto while she is hit by Komolika on the head. Later, Prerna arrives at Basu house and reveals that Sonalika is Komolika.

Komolika accuses Prerna of trying to steal Anurag from her. Prerna rushes to Anurag’s room and reveals that they used to love each other in the two years.

Anurag gets flashes of memories and later Mohini enters the room. Anurag doesn’t want Prerna to leave and asks Komolika to stop her drama.

© Copyright tellybest.com, 2018 & 2019. All Rights Reserved. Unauthorized use and/or duplication of this material without written permission from tellybest.com is strictly prohibited.
Cached Saved on: Tuesday 7th of July 2020 02:08:20 AMCached Disp on: Thursday 9th of July 2020 07:10:08 PM