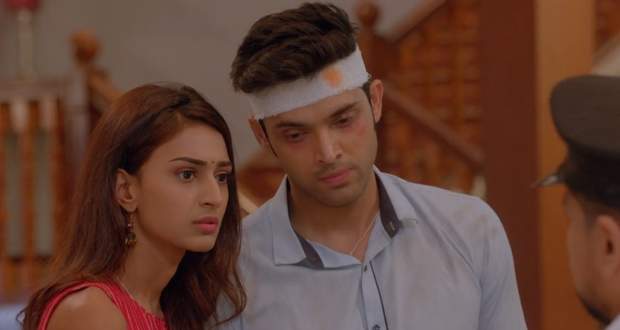 She reaches on time to hold the pillar.

She gets very upset to see Anurag in that condition.

Mahesh and Prerna carry Anurag to get out of the site.

Mr. Bajaj gets to know about the fire in his factory.

Prerna takes Anurag to her home. Her pain to see Anurag in that condition makes her realise how much she loves him.

Prerna gets tears of joy when Anurag wakes up.

She claims she can never let anything happen to Anurag as he is everything to her.

Anurag realises Prerna threw her life on stake to save him.

Later, Anurag and Prerna are informed that there is police downstairs.

Inspector says Mr. Bajaj’s factory is all burnt down and Anurag has to come to police station as he was present there.

Meanwhile, Mohini convinces Panditji to get materials required for marriage after a week.

At the same time, she gets a call from Prerna telling her tha Anurag is arrested by police.

Mohini gets devastated after learning this information.

She insists on going to the police station with Nivedita.

Prerna decides to stay strong in front of Anurag.

Anurag realises that everything was planned and the real mastermind behind everything is Mr. Bajaj.

He also tells Prerna that Komolika was the one who gave their files to Mr. Bajaj.

Mohini comes in the police station and creates a scene.

Another inspector comes and informs that they have found a dead body which might be of Ronit.

He also says that watchman claimed Anurag was after Ronit to kills him.

The inspector also says that the case will turn into a murder case if he finds Anurag’s fingerprints on iron rod.

DCP changes his statement on inspector’s explanation of the case and tells him to not release Anurag.

Upcoming season 2 Kasauti Zindagii Ki (KZK 2) episode update: Mr. Bajaj tells Prerna she has to lose Anurag to save him.