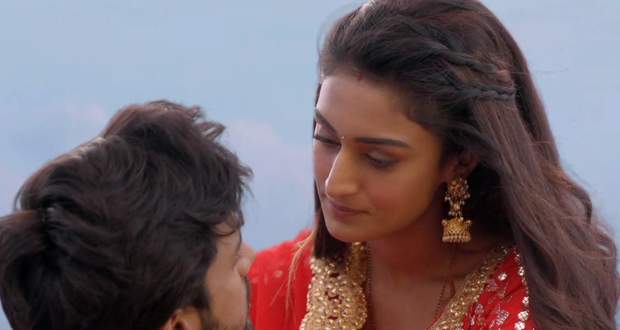 Today's KZK2 2 Mar episode starts with Prerna getting disturbed to see Anurag and Komolika close. She decides to trust Anurag as he is doing everything for their betterment.

Prerna confronts Anurag about being scared and is afraid to lose him. Anurag assures her and asks her to come along with him to a special place.

He takes her to the Howrah Bridge to show his feelings for her. He picks her up and brings her near the edge of the bridge and reveals his feelings regarding love.

He reveals he realized the true meaning of love after meeting her. He shares his feelings for Prerna and says he can die for her as well.

Prerna wishes to go home while Anurag asks if she loves him and makes her sit on the bridge. Prerna reveals her feelings for Anurag and they share some beautiful moments.

She says she loves him a lot and she can also die for him. Anurag pushes her off the bridge and asks her to die. Prerna is shocked and remembers their special moments.

She falls into the water and is saved by Mr. Bajaj. Bajaj puts her on a floating wooden plank and Prerna is shocked that Anurag tried to kill her.

She gets shocked to see Bajaj as well while he reveals that the news of his death was fake. She asks Bajaj to take her to the villa as she wants to confront Anurag.

However, she finds Anurag and Komolika getting intimate at the villa. She is about to confront Anurag when Bajaj stops her. He takes her to his house and reveals a shocking truth.

He reveals that the papers she signed in the morning were property papers and the property he gave to Prerna is now being transferred in Anurag’s name. Further they learn that Komolika has sent Prerna’s daughter to an orphanage.

© Copyright tellybest.com, 2018 & 2019. All Rights Reserved. Unauthorized use and/or duplication of this material without written permission from tellybest.com is strictly prohibited.
Cached Saved on: Tuesday 7th of July 2020 12:36:37 PM