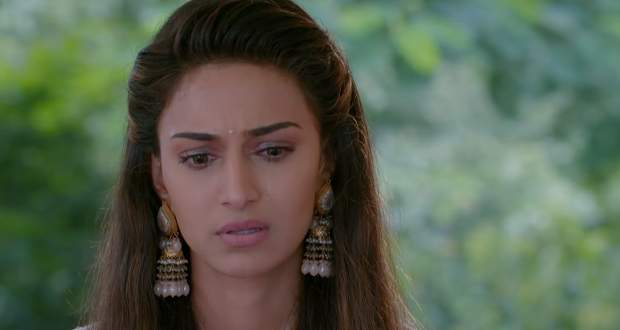 Anurag explains Prerna that Mr. Bajaj brought her to the farmhouse to show the closeness of Anurag and Komolika. Anurag reveals that he requested Komolika to not part him and Prerna.

Komolika wanted Prerna to hate Anurag. Anurag is sure Prerna won’t believe anything while Bajaj suggests doing the drama of killing Prerna. Anurag trusted Bajaj that he will save her.

Anurag also reveals that he told Bajaj about the Aashram. Prerna is shattered to learn that even Bajaj betrayed her. Prerna is not ready to believe it while Anurag tries to convince her.

Anurag reveals that he even helped Veena when she was in the hospital through Komolika. Anurag shows her the proof of Bajaj and Chandrika being involved in the plan.

He also shows the video of Viraj being pushed by Prerna. Prerna is convinced and believes Anurag. She further hugs Anurag and confesses her love for him.

Bajaj reaches Basu Badi and rebukes Komolika for planning to kill Prerna. At the same time, Anurag saves Prerna from the attack of the goons. He fights the goons while Prerna also supports him.

© Copyright tellybest.com, 2020, 2021. All Rights Reserved. Unauthorized use and/or duplication of any material from tellybest.com without written permission is strictly prohibited.
Cached Saved on: Tuesday 28th of September 2021 12:28:10 AM