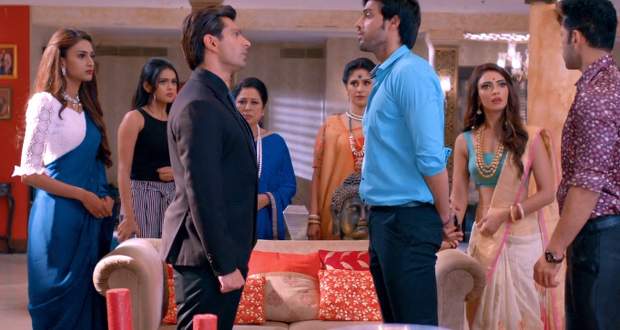 Today's KZK2 2 Sep episode starts with Anurag telling Prerna that he will never forgive her. Anurag wishes to be her friend but Prerna denies saying there is no scope for friendship.

She further tells him that he will get a better girl. Anurag requests Prerna to return in his life but at the same time, Bajaj comes and witnesses their confrontation.

Anurag tells Bajaj not to question Prerna as he wanted to talk to her. Bajaj warns Anurag to be in his limits and remember Prerna is his wife.

They both continue to argue over Prerna and prove whose relation is stronger. Later, Prerna wonders why Bajaj is upset with her.

Tanvi decides to help Bajaj while Sharda apologizes from him for her actions. Meanwhile, Shivani decides to do a job to save her mother from trouble.

Prerna confronts Bajaj about ignoring her. At the same time, Bajaj gets angry to receive a call and calls out for Anurag' name.

He comes in the hall and Mohini instructs him not to speak so loudly.

Bajaj blames Anurag for stealing his employ and getting the quotations from him. Anurag is pleased with his plan and asks if he is upset with Rajeev not following his orders.