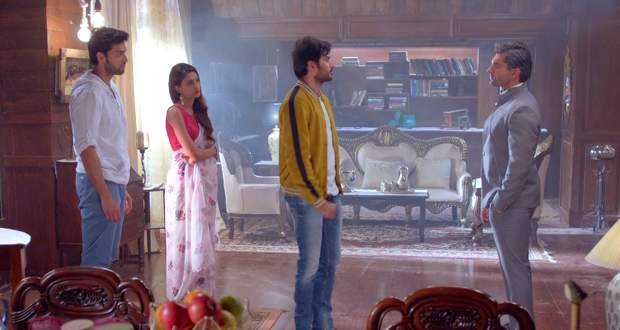 Today's KZK2 30 Jul episode starts with Prerna and Anurag still running away from Ronit and his people. Bajaj continues to fume with anger and warns Nivedita of the consequences.

Meanwhile, Prerna and Anurag reach an isolated place and take shelter in an empty house. Anurag starts searching for some medicine to treat Prerna’s foot.

Mr. Bajaj hires a speedboat to search for Prerna.

Prerna and Anurag again start arguing over her marriage and Anurag’s adamant behavior. A knock on the door interrupts them.

Anurag opens the door to find Mr. Bajaj on the other side. Bajaj gets further angry after he sees Prerna coming out of the house.

Bajaj starts blaming Anurag for stalking and kidnapping his wife. Prerna interrupts him and defends Anurag. She says he saved her from the danger.

She tells him the whole story about the gangsters and Ronit’s plan. Bajaj plans something to trap Ronit in his plan. He sends the location and tells Ronit to bring Prerna.

Ronit gets delighted with his success and reaches the cottage. He finds Mr. Bajaj inside and gets shocked.

Ronit and Bajaj start talking about their deal while Prerna gets scared about the revelation of her own deal in front of Anurag.

Ronit starts to tell about Prerna’s deal but gets interrupted by Bajaj who manipulates him and warns him as well.

© Copyright tellybest.com, 2018 & 2019. All Rights Reserved. Unauthorized use and/or duplication of this material without written permission from tellybest.com is strictly prohibited.
Cached Saved on: Thursday 16th of July 2020 11:42:06 PM