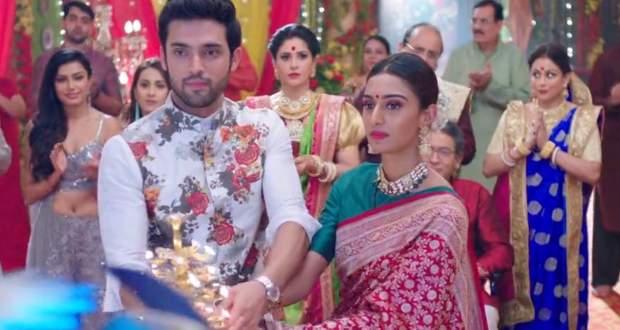 Today's KZK2 3 Oct episode starts with Prerna and Anurag sharing eye contact while Sharda getting worried about it. Later, Prerna helps with Moloy’s wheelchair and talks to him.

She shares her grief while remembering her father. Moloy gives his blessing while Prerna gets delighted to see that he is recovering.

Anurag reminds her of the old memories and the number of times Anurag has put Sindoor on her forehead. Prerna gets emotional listening to his words.

Prerna gets upset and the whole scene is witnessed by Bajaj. Later, Mouli talks about Anurag and Bajaj fighting over Prerna.

Mohini wants Anurag to lose in that battle which shocks him. Meanwhile, Bajaj wants Prerna in his life and wishes to talk to her.

Later, Mohini and Moloy start the Durga aarti followed by others in the family. Prerna takes the Aarti from Anupam and later Anurag also joins in.

Sharda goes to tell Bajaj everything and bring him down. Moloy gets delighted to see them together while Mohini and Bajaj get angry with the situation.

Prerna wonders why she wants to wish for Anurag who she can never get in her life.

© Copyright tellybest.com, 2018 & 2019. All Rights Reserved. Unauthorized use and/or duplication of this material without written permission from tellybest.com is strictly prohibited.
Cached Saved on: Thursday 6th of August 2020 05:50:55 PM