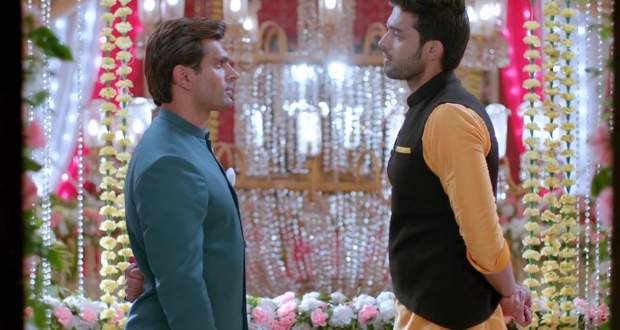 Today's KZK2 5 Sep episode starts with Bajaj getting nervous while being around Prerna. Meanwhile, Anupam wakes up Nivedita by playing loud music and later they both later start dancing.

Maasiji gets worried for Bajaj being influenced by Prerna. Tanvi shows Maasiji how Anurag is staring at Prerna and says Rishabh will not stay quite after watching this.

At the same time, Rishabh says he is getting uncomfortable with the way Anurag is staring at Prerna. They decide to have a face-off after the Pooja.

Later, Anurag wishes to do the Pooja with Prerna and reminds Anupam the last year’s Ganpati story. He says there was no relation between them and still they did Aarti together.

Meanwhile, Bajaj is searching for some papers while Tanvi comes to call him for Aarti. Tanvi decides to help Bajaj and tries to get close to him.

Prerna comes to help Bajaj but he gets uncomfortable staying close to her.

Bajaj warns someone on phone about not giving him whole payment as they have not completed work. Anurag listens to this and blames him for attacking him. He further warns him about bringing his true face in front of everyone.

Upcoming season 2 Kasauti Zindagii Ki (KZK 2) episode update: Prerna asks Bajaj if he wants everyone to like him while Bajaj warns Anurag about his actions.