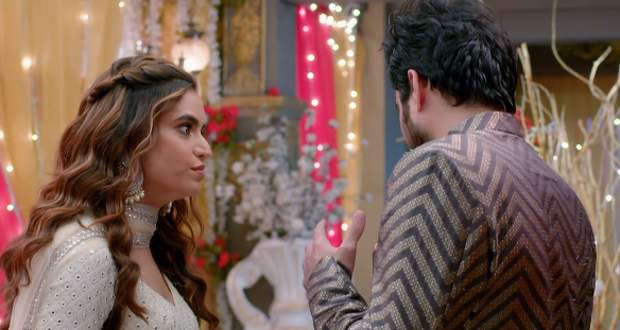 Today's KZK2 5 Sep episode starts with Ronit getting worried about Komolika’s reaction. Shivani wonders why Ronit is tensed while Ronit decides to tell Komolika the truth about losing his phone.

Kukki asks Shivani about her love experience while Shivani expresses her views. Meanwhile, Prerna gets upset with Anurag’s actions and declares she doesn’t trust him.

Anurag gives his jacket to Prerna while she puts it in a freezer. Prerna thinks Anurag is drunk and feels he is behaving like the old Anurag. Later, Ronit tells Komolika about his mistake and reveals he lost his phone without deleting her message.

Komolika fumes in anger and slaps him while the scene is witnessed by Veena. Komolika is further worried about Shivani learning everything and Veena gets shocked to overhear this.

Prerna and Anurag continue to argue and talk about each other’s Karma. Anurag gets frustrated with Prerna not using his jacket. Elsewhere, Komolika is upset with Ronit and talks about the message.

She sees Veena overhearing their conversation and changes her words. She says Ronit shouldn’t have lost his phone as Shivani’s messages were on that phone.

Veena leaves while Komolika shows Ronit’s phone to him. She tells him everything about how she got the phone from Moloy and spilled juice on it. The phone is dead while Komolika plans to stop Moloy by hurting him again.

Kaushik thinks Ronit is not the right guy for Shivani and is adamant to stop their wedding. Meanwhile, Prerna refuses to take help from Anurag while later she gets unconscious. Anurag witnesses the same and tries to help her.

© Copyright tellybest.com, 2018, 2019, 2020. All Rights Reserved. Unauthorized use and/or duplication of this material without written permission from tellybest.com is strictly prohibited.
Cached Saved on: Wednesday 25th of November 2020 12:08:26 AM