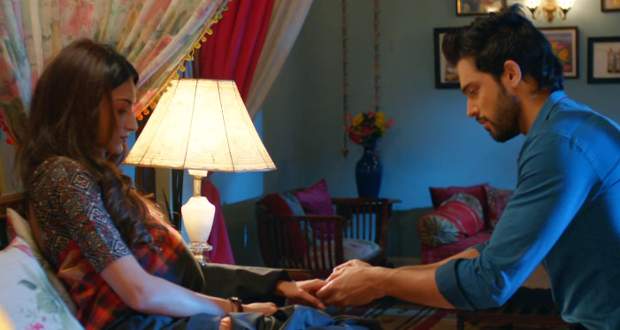 Komolika is happy with her plan of giving medicines to Anurag that helps him forget past memories. Meanwhile, Prerna continues to think about the engagement ring given by Anurag.

Anurag arrives at the same time and offers a solution to remove the ring from her finger. He carefully applies the oil but is still unable to get the ring out.

He promises that he will not let her get into any embarrassing situation. Prerna is confused as Anurag is unable to remember anything.

Anurag leaves early morning with gifts and Mohini is worried. Mohini suggests in front of Komolika that Anurag is there just to help the poor Sharma family.

Komolika wants Nivedita and Mohini to speak the truth about Prerna. Later, Anurag arrives at Sharma house with some gifts and dress for Prerna.

Daadi meets Anurag and tells him that he already married Prerna. Veena tells him that Daadi forgets about things. Later, Anurag gives the dress to Prerna and at the same time, Komolika comes in the room.

She accuses Anurag of leaving her at home and coming alone. Komolika proves that she has right on Anurag while Prerna shows her the ring given by Anurag.

© Copyright tellybest.com, 2018 & 2019. All Rights Reserved. Unauthorized use and/or duplication of this material without written permission from tellybest.com is strictly prohibited.
Cached Saved on: Wednesday 8th of April 2020 09:03:44 PM