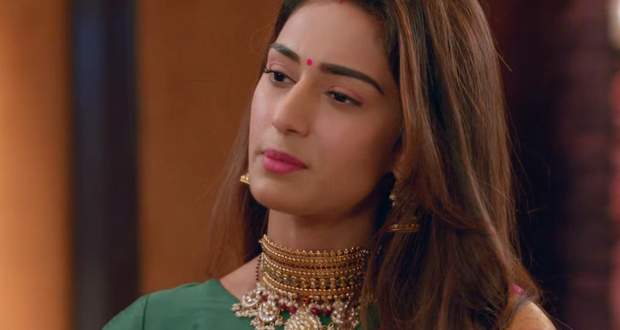 Today's KZK2 7 Jan episode starts with Viraj giving a hand to Prerna so that she doesn’t fall. Komolika mocks Prerna and is really happy that Prerna will be out of Anurag’s house.

Prerna learns that Anurag saw the same dream of leaving her behind. Prerna is sure that Anurag will remember everything in the Tilak ceremony.

She challenges her that Anurag will be the one to break her marriage. Komolika gets worried about hearing Prerna’s words and fears Anurag developing feelings for Prerna.

Later, Anurag asks Prerna is she is happy while Prerna asks him the same question. Prerna shows that she isn’t happy with the marriage while Anurag gives a black thread to her.

Anurag accidentally puts sindoor in Prerna’s forehead. Anurag asks about his Mangalsutra while she says she will keep it till the time she gets married.

Anurag feels a strong connection with Prerna while Komolika wonders why Anurag went in Prerna’s room. She is scared about Anurag regaining his memory.

Komolika spoils Anurag’s clothes using oil so that he stays away from the Tilak ceremony. Meanwhile, Veena and Mohini show their respective happiness for Prerna’s Tilak ceremony.

Later, Anurag learns that his clothes have spoiled while Komolika decides to test his memory. She shows him a Chunri and Anurag gets flashes of memory with Prerna.