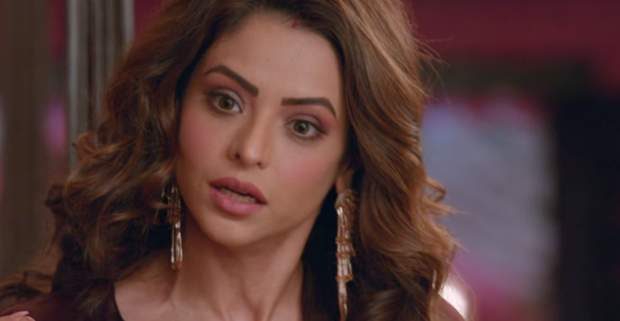 Today's KZK2 8 Jan episode starts with Komolika again asking Anurag if he likes the Chunri. Anurag doesn’t remember anything and decides to keep him away from his past.

Prerna is crying and is upset about Anurag’s state. Veena arrives and Prerna and Shivani act of laughing. Komolika brings Chunri for Prerna.

Komolika says it is the same Chunri that Anurag had brought on their wedding day before he lost his memory. She even declares that the doctor has said Anurag will never regain his memory.

Prerna is sure she will stay near Anurag always. Meanwhile, Viraj offers to help Mahesh with his cricket practice while Moloy doesn’t like his interruption.

Prerna arrives in the living room and continues to search for Anurag. The rituals of Tilak start while Anurag is still upstairs watching Prerna.

He arrives downstairs and Prerna continues to stare at him. Anurag can now clearly see in his dream that Prerna is the girl leaving him and doesn’t want her to go.

Anurag gets really disturbed and leaves the rituals. Meanwhile, Prerna asks for Anurag while Komolika says she will bring him.

Anurag wishes to ask Sonalika aka Komolika about his feelings but changes his decision witnessing her mood. He decides to talk to Prerna instead.

Later, Anurag is compelled to give the coin to Viraj and handover Prerna’s responsibility to him.

Upcoming season 2 Kasauti Zindagii Ki (KZK 2) episode update: Anurag says he has feelings for Prerna while later dances with her.

© Copyright tellybest.com, 2018 & 2019. All Rights Reserved. Unauthorized use and/or duplication of this material without written permission from tellybest.com is strictly prohibited.
Cached Saved on: Friday 17th of January 2020 06:40:09 PMCached Disp on: Thursday 23rd of January 2020 07:16:36 AM