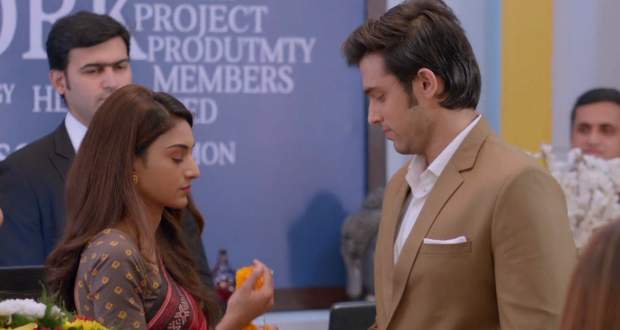 Today's KZK2 8 Nov episode starts with the owner telling Prerna to welcome the new boss. Anurag arrives and Prerna gets shocked to see him. She welcomes him by putting a garland around his neck.

Anurag thinks Prerna is also his fan, like the rest of college girls. Later, Anurag learns that Prerna is his secretary. Anurag asks for a file from her but the papers blow in the whole room due to wind.

Prerna and Anurag try to catch the papers and later get close to each other. Prerna remembers their earlier encounters but they are interrupted by the phone ringing.

Anurag forgets a file at home and asks Nivedita to bring it to his office. Komolika asks Nivedita if she can give the file to Anurag in the office.

Later, Komolika arrives at the office and calls herself the owner of the company. She bumps into Prerna but is unable to see her and the manager wants Prerna to apologize.

Prerna rushes for the meeting of Anurag while Komolika enters Anurag’s cabin. The manager Ashish tells Komolika that Anurag is in the conference room.

© Copyright tellybest.com, 2018 & 2019. All Rights Reserved. Unauthorized use and/or duplication of this material without written permission from tellybest.com is strictly prohibited.
Cached Saved on: Sunday 26th of January 2020 07:26:47 PM