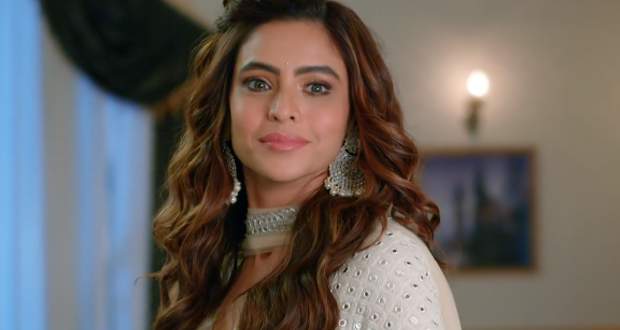 Today's KZK2 8 Sep episode starts with Komolika picking up the knife and cutting an apple. She states Anurag was sorry as he had to kiss Prerna to save her.

Prerna is confused about why Anurag saved her and thinks he wants to take revenge. Komolika also wanted her to stay alive and further asks for 51 percent shares of Bajaj city.

She further threatens to get the orphanage demolished if she doesn’t give the shares of Bajaj city. Prerna again misunderstands Anurag and thinks it is his idea.

Samidha asks Anurag about Prerna and is really worried about her. Anurag assures her that Prerna is fine and promises to fight with any problem in her life. He gives a shawl to Samidha to give to Prerna.

Komolika meets Samidha and calls her angel. Meanwhile, Prerna recalls her conversation with Bajaj and thinks he was right about Anurag’s intentions.

Komolika decides to talk to Anurag and teach him a lesson. She puts her arms around him and seeks his attention. She accuses him of being close to Prerna and forgot about their marriage.

Anurag gets angry with Komolika’s allegations and admits he kissed Prerna. He says he will always help Prerna in every situation. Komolika wishes to talk to him later in their home.

He also warns her of paying price for his mistakes and confronts her about ordering for the demolition of the orphanage. Komolika says she didn’t do anything and that Prerna is manipulating him.

Anurag reveals he has learned everything from Rohitag about her plan of demolishing the orphanage.

© Copyright tellybest.com, 2018, 2019, 2020. All Rights Reserved. Unauthorized use and/or duplication of this material without written permission from tellybest.com is strictly prohibited.
Cached Saved on: Tuesday 24th of November 2020 11:27:25 PM