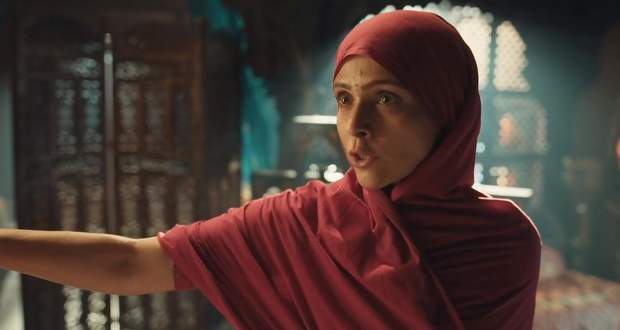 Today's Kashibai Bajirao Ballal 11th May 2022 episode starts with Ratna shouting for help as Chimaji is trapped inside a burning room with the enemy.

Baji manages to break the door and is about to attack the enemy when Kashi stops him and tells Suryaji to take the attacker away.

In the courtroom, Radha requests to give the attacker a death sentence but the attacker reveals that he did it on Kashi's orders.

Kashi accepts that she had Chimaji's room attacked and says that it was to prove that Chimaji is not unwell and is perfectly healthy.

Radha argues with Kashi and tells her that she's betrayed everyone while Kashi ignores her orders that Chimaji will go on the war after two days as punishment without any excuse.

Later, Baji goes to Kashi and asks her why she didn't inform him about the fire while she explains to him that she did it to strengthen Chimaji's resolve to win.

Baji praises Kashi and hugs her while she makes him drink turmeric milk for better sleep.

However, Kashi tells him that he has to become her spy for some time.

In Chimaji's room, Radha and Ratna are thinking of going to Shivaji to complain about Kashi when Baji comes there.

Baji tells Chimaji that he should escape which Radha and Ratna agree with.

However, Chimaji refuses saying that will be called a coward by everyone.

Baji returns to his room and flirts with Kashi while informing her that Chimaji has accepted the idea of running away.

Kashi feels shocked when Baji tells her that Chimaji is conflicted but he will make sure that Chimaji goes to war.

Further, Baji gets close to Kashi and they spend the night together.

After midnight, Kashi wakes up and gets worried not seeing Baji with her.

In the office, Baji reads a scroll while telling Suryaji to make sure that no one reads it or it will cause chaos.

To get to know more, download Kashibai Bajirao Balal all episodes or watch online today's (11 May 2022) latest full episode, go to zee5.com