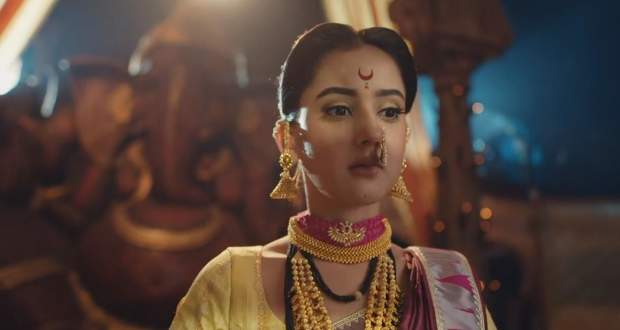 Today's Kashibai Bajirao Ballal 12th May 2022 episode starts with Kashi coming to the office and seeing Baji and Suryaji talking.

However, Baji closes the chest filled with scrolls and tells Kashi that they have made Chimaji escape.

Kashi tells him that she had already stopped Chimaji from escaping.

Baji worries for Chimaji while Kashi says that everything will go as planned and that Chimaji will go to war after two days.

Later, Chimaji is being slapped by his kidnapper while Kashi comes there and intimidates him by telling him stories of kings killing their siblings/parents for the throne as Baji looks on from the hiding.

Kashi further tells Chimaji that she tried to get him killed many times but he got saved every time and gives him a plate saying that it will be his last meal.

Chimaji refuses to believe this sinister side of Kashi and retorts that he's not afraid of death.

Kashi tells him that he's a coward to the rest of the world and orders her men to kill him as a coward should die.

However, Kashi hides her tears and rushes to Baji who praises her when suddenly Kashi falls unconscious.

Later, Baji takes Kashi to their room and takes care of her while she ties a knot between their clothes to keep him from leaving.

Looking at Kashi with love-filled eyes, Baji caresses her cheeks and puts her to sleep when Chimaji comes there and tells Baji that they have received a message from Bundelkhand.

Baji unties the knot and leaves while Suryaji reveals that the message has not been sent through a messenger and shows a note attached to an arrow on a tree.

Meanwhile, Kashi wakes up and looks for Baji.

Baji climbs the tree and gets the note after which he marches inside the palace while Kashi wonders who is sending so many messages from Bundelkhand to him as she looks at him.

To get to know more, download Kashibai Bajirao Balal all episodes or watch online today's (12 May 2022) latest full episode, go to zee5.com