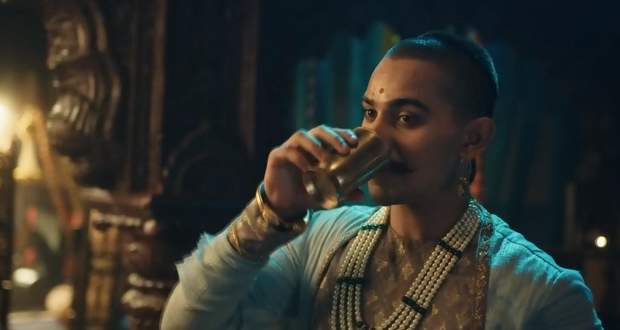 Today's Kashibai Bajirao Ballal 16th May 2022 episode starts with Kashi packing her things while Ganga asks her where they are going.
Kashi happily tells her that she and Baji are going away on a trip.

Just then, a servant brings a plate with Puranpuri and a scroll from Radha which states that she apologizes for refusing the food that she had made for her earlier.

Kashi feels over the moon as she eats the Puranpuri while Ganga is still suspicious of it.

Suddenly, Kashi starts having stomach pains while Ganga goes to call a Vaid.

Elsewhere, Baji and his troops locate a person with vail hidden behind a tree and shoots arrows at them.

However, the person saves themselves and shoots an arrow with a note written on it.

Baji reads the letter saying that the people of Bundelkhand are waiting for him as they are getting tortured by the Mughals constantly.

Back at the palace, Kashi learns that she is pregnant and gets elated while telling Ganga to decorate the whole place and keep her pregnancy a secret.

The troops get shocked to see the person unveil and a girl's hair being revealed while Baji reveals that it is Mastani, the girl who wrote to him at midnights.

Meanwhile, Kashi looks for Baji and goes to his office where she reads the scrolls cries for help from Mastani, and sobs in guilt.

Upon further reading, Kashi finds out that Baji hasn't responded to any of the scrolls and the last message pitying him for his cowardice.

Later, Kashi wonders why Baji hasn't responded to any of the scrolls while Baji comes there and tells her that he knows the reason for the decoration of the palace.

Kashi fails to inform him about her pregnancy while Baji tells her that the news of Chimaji's victory has reached him too.

At night, Kashi cries to Ganga and tells her that she will inform Baji about the pregnancy only after his return from Bundelkhand.

To get to know more, download Kashibai Bajirao Balal all episodes or watch online today's (16 May 2022) latest full episode, go to zee5.com