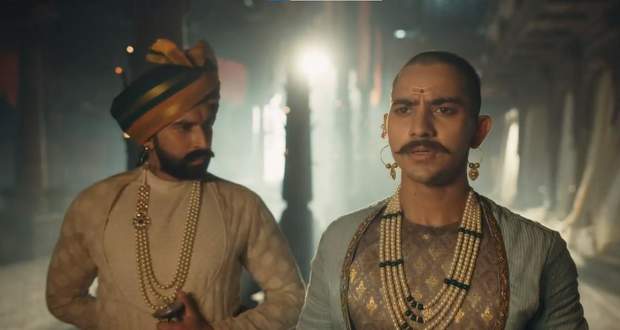 Today's Kashibai Bajirao Ballal 17th May 2022 episode starts with Kashi crying to Ganga about how she read about mothers jumping into the well with their children to avoid being killed.

Kashi says that Baji will have to leave for Bundelkhand after the celebration and that she will never inform him about her Pregnancy till then.

Meanwhile, Radha talks to Kaveri about the special glow on Kashi's face and thinks that she will get good news soon.

Kashi tells Ganga that the people of Bundelkhand need Baji's help more than her.

Elsewhere, Radha gives something to Kaveri and tells her to notice Kashi's expression about opening it.

Kaveri comes to Kashi and gives her the box while Kashi gets surprised to see the bangles for the baby.

Later, Chimaji's arrival is celebrated while everyone goes inside and gets shocked to see the things for a little baby there.

Kashi scolds Ganga and lies to everyone that she wanted to officially accept Chimaji as her son.

Baji and Kashi do all the rituals while Kashi feels guilty for hiding the truth from Baji.

Meanwhile, Radha and Kaveri see the glow in Kashi's nature and decide to call a doctor to confirm that Kashi is pregnant.

Baji takes Kashi to the swing and tells her that he is waiting for the day when he gets the happy news of becoming a father.

Later, Bajirao learns that Shivaji has refused to help the Bundelkhand due to which Mastani has turned to Baji for help.

Meanwhile, Kashi calls everyone to the courtroom for a meeting while Radha gets happy thinking it's to announce the pregnancy.

However, in the courtroom, Kashi reveals that she has read the scrolls from Bundelkhand and questions Baji why he hasn't replied to any of them.

To get to know more, download Kashibai Bajirao Balal all episodes or watch online today's (17 May 2022) latest full episode, go to zee5.com