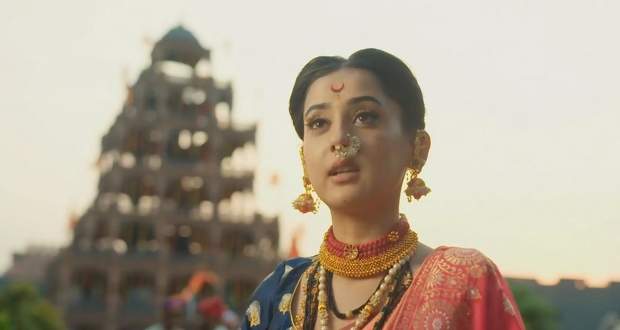 Today's Kashibai Bajirao Ballal 18th May 2022 episode starts with Kashi revealing that Bundelkhand has been attacked by Mughals and how a lot of people are mascaraed.

Further, Kashi states that the females are the first victims in any war and says that it is their duty to save them.

Baji says that he has the right to choose whom to help and whom to not help when Kashi says that as the Peshwin, she also has some authority in silencing Baji’s protests.

Baji reveals that the king of Bundelkhand, Chhatrasal was once a friend of the Mughals which is why he is not trustable.

However, thinking of the misery people of Bundelkhand, Kashi states that Baji has to help them and puts forward a condition.

Kashi states that she will step down from her position as Peshwin if the people of Peshwa support Baji.

However, if the people support Kashi, Baji will have to help Bundelkhand.

Later, Kashi tells Baji that she doesn't want him to go to war but she also doesn't want the people of Bundelkhand to suffer.

Baji that Kashi that she is going to lose and reminds her that if she loses they will get to live her dream of having a normal day.

Baji says that she won’t have any responsibilities as a Peshwin and he also won’t have to go to war with Bundelkhand.

Meanwhile, Radha tells Kaveri to spread rumors of Bundelkhand being allianced with Mughals as it is their chance to dethrone Kashi.

Baji asks Chimaji about the troops while Chimaji responds that the troops are on his side and that Kashi is going to lose.

At night, Baji brings mangoes for Kashi while she eats raw mangoes instead of ripened ones.

Kashi is happy thinking that she is experiencing all the moments she wanted with Baji without revealing her pregnancy.

The next day, Baji and Kashi stand outside the Palace waiting for the people to wave flags and conclude the results.

To get to know more, download Kashibai Bajirao Balal all episodes or watch online today's (18 May 2022) latest full episode, go to zee5.com