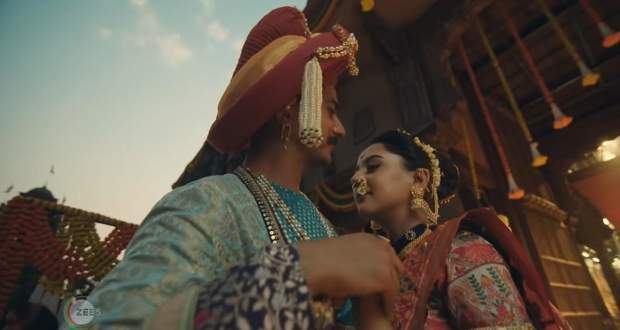 Today's Kashibai Bajirao Ballal 2nd May 2022 episode starts with Kashibai telling everyone that the place should look as bright as a new bride for the celebration.

Kashi imagines Baji romancing her when she hears an announcement of a court gathering in honor of her.

Kashi gets surprised while Radha gets the news and says that she cannot let that happen.

At the court gathering, Baji reveals that the Mughals had kidnapped Chimaji but Kashi had saved him with her intelligence in his absence.

Further, Baji reveals that as a reward, Kashi has been given the political authority of a Peshwin.

Kashi insists that she doesn't need the authority while Radha interrupts saying that only Shahu Maharaj has the authority to make Kashi Peshwin.

However, Baji reveals that he has done it on Shahu Maharaj’s only which leaves everyone in shock.

Baji requests Kashi to sit on the throne but she denies saying that she can't sit there.

However, she stands in front of the throne and says that she will accept the authority with respect.

Later, Kashi and Durga are walking in the garden when Durga shows her concern over Baji’s lack of affection towards Kashi.

However, Kashi says that Baji loves her a lot as he didn't even hesitate before giving her the authority.

Kashi sits on the swing when Baji comes there while Durga leaves them alone.

Kashi tries to express her feelings to Baji

Feeling amused, Baji asks her what is bothering her mind but Kashi gets shy and says that he won't understand her mind.

Getting shy, Kashi asks Baji if he has ever heard poems and tells her that there is something that only poems can win that his swordsmanship or his fighting abilities cannot.

Baji doesn't understand her ways of flirting and tells her to speak clearly.

Kashi tells him that she wants a position that only he can give her with the hopes that he understands her words.

However, Baji still doesn't understand and Kashi helplessly tells him to think about it.

Request for Kashi in the courtroom

Elsewhere, a lady runs through the jungle and manages to enter the courthouse.

A servant comes to Kashi and tells him that she has been requested to the Courtroom.

In the courtroom, Kashi reads a letter from the requester who tells her that she wants to say her plea in private and not in front of an audience.

Kashi says that she respects the requestor and tells the audience to leave after which a lady with her head covered enters the courtroom.

Kashi greets the lady and asks for her introduction.

The lady says that she is the sister of Baji, Bhiubai Joshi shocking Kashi, and Radha.

Kashi recalls her childhood moments with Bhiu and gets emotional seeing the injuries on her.

To get to know more, download Kashibai Bajirao Balal all episodes or watch online today's (2 May 2022) latest full episode, go to zee5.com