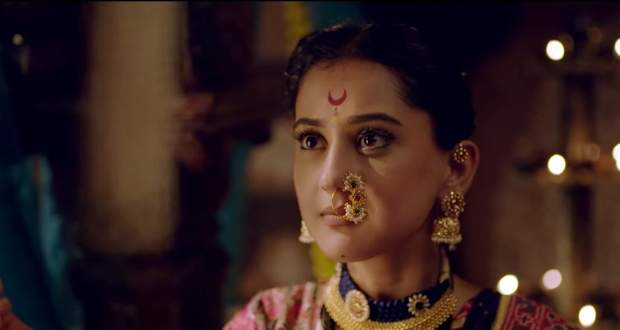 Bhiubai says that she wants justice for her self-esteem and reveals that it is none other than her husband.

Bhiu reveals that her husband has a mistress and that he beats Bhiu for trying to stop him.

Bhiu requests Kashi to give her justice and punishment for her husband.

Kashi sympathizes with Bhiu saying that she is sorry for not realizing her pain while Radha insists on her to take immediate action.

Kashi says that she has heard Kashi’s plea and now the accused (Kashi’s husband) will also be brought to the courtroom for the hearing.

Bhiu says that she is disappointed with Kashi’s decision while Kashi tries to explain that she has to respect the court by hearing both sides first.

However, Radha says that what Kashi thinks won't happen and leaves from there with Bhiu.

Elsewhere, Baji talks to Suryaji about Kashi’s complex words and asks him what she means by asking for her rights.

Suryaji understands Kashi’s feelings and explains to Baji that Kashi is asking for her rights as his wife and was asking about love.

Later, Baji recalls how harshly he used to behave with Kashi and thinks of something.

He goes to the jeweler and gives him a design of a nose ring which he intends to gift Kashi.

Meanwhile, Kashi gets surprised seeing her room decorated and imagines romancing Baji while reading a letter that tells her that he will bring a surprise for her later.

In the evening, Baji returns home with the nose ring but stops seeing Bhiu and injuries on her body.

A servant goes to Kashi and informs her of Baji’s return.

Baji tells Radha and Bhiu that he won't leave Bhiu’s husband and runs to his horse.

However, the front gates close before he can leave while Kashi tells him that they have to listen to both sides before giving a verdict.

Baji tells her that he can handle the situation while Kashi reasons that she should have the authority to give a verdict as the case came to her.

To get to know more, download Kashibai Bajirao Balal all episodes or watch online today's (3 May 2022) latest full episode, go to zee5.com