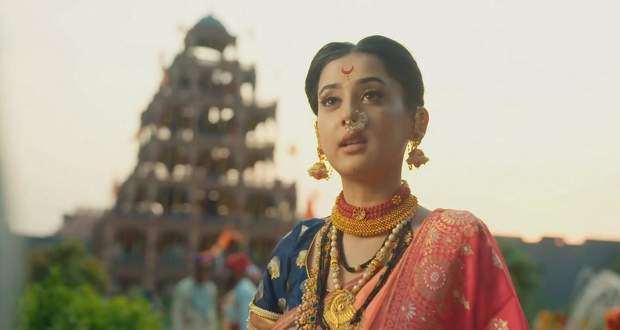 Today's Kashibai Bajirao Ballal 4th May 2022 episode starts with Kashi stopping Baji saying she is ordering him to not go anywhere and apologizes for doing so.

Meanwhile, Baji tells Kashi that it was his mistake of making her Peshwai and giving her authority.

Baji tells Kashi that she isn't thinking like a woman and that she doesn't deserve the title of Peshwai as she doesn't know how to do justice.

Kashi gets hurt by Baji's words but still stands her ground that they have to hear both sides of the case before giving a verdict.

She further goes on to say that he can take back the title of Peshwai from her if he doesn't see her as worthy.

Baji throws away the nose ring he got made for her.

Later, Kashi sits on the swing and cries thinking that she had waited for Baji's love and her rights as his wife for her whole life and now the same thing got taken away from her.

Bhiu gets upset with Baji

Elsewhere, Baji apologizes to Bhiu saying that he is bound by the law and cannot leave the palace without Peshwai's permission.

Bhiu gets angry with Baji and tells him how her husband had mocked her by telling her to bring Baji for her help before beating her.

In the courtroom, Kashi asks Suryaji if he has summoned Abaji to the court when Suryaji reveals that Abaji is the one funding their army and that they will bankrupt if he is punished.

Kashi says that justice needs to be done while Suryaji warns that Peshwa might not be there in the future if she tries to meddle with Abaji.

Later, during the Pushpa Utsav Pooja, Kashi is waiting for Baji to arrive when Baji sends her a message that he is not coming to do the pooja with her.

Kashi starts the pooja without Baji when Radha comes there and informs that Bhiu is nowhere to be found.

Radha tells Kashi that everything is her fault with the warning that she will be responsible if anything happens to Bhiu.

Later, Kashi and Baji find Bhiu and try to stop her while Bhiu says that no one cares for her and removes all the ornaments on her.

However, Bhiu makes Kashi promise that she will also have to take Sanyas with her if she fails to give her justice as everyone looks on in anticipation.

To get to know more, download Kashibai Bajirao Balal all episodes or watch online today's (4 May 2022) latest full episode, go to zee5.com

© Copyright tellybest.com, 2020, 2021. All Rights Reserved. Unauthorized use and/or duplication of any material from tellybest.com without written permission is strictly prohibited.
Cached Saved on: Sunday 2nd of October 2022 05:24:59 AM