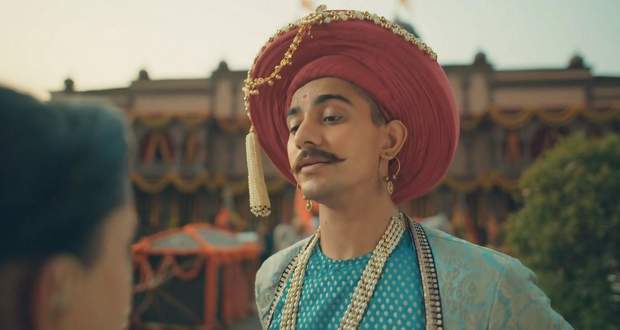 Today's Kashibai Bajirao Ballal 5th May 2022 episode starts with Kashi accepting Bhiu’s promise and saying that she will take Sanyas with her if she fails to provide justice.

An astonished Baji asks Kashi if she knows what she just did while Kashi orders Suryaji to arrest Abaji immediately.

However, Suryaji reminds her that the Peshwai might go bankrupt if they arrest Abaji.

Kashi shuts the mouths of everyone with her intelligent words.

Fearing for his own being, Suryaji says that they can't arrest Abaji since he has joined hands with the Mughals.

Just then, Baji comes there and promises Kashi that he will bring back Abaji and leaves.

The next morning, Baji brings Abaji to the courtroom in cuffs was everyone looks on.

Abaji disrespects Kashi in front of everyone and discriminates against her for being a woman of authority.

Being angered by Abaji’s insulting words towards his wife, Baji is about to speak his mind when Kashi stops him.

Kashi says that women are no less than men when Abaji signals his servants.

The servants bring forth a ton of empty trunks and tell Kashi to fill them with gold to pay off the debt the kingdom owes him and then talk about equality between them.

Kashi starts removing her jewelry and puts them in the trunk saying that the whole of Peshwai owes him for feeding the army who saves the ladies of the kingdom.

All the other ladies follow after Kashi and all the trunks are filled with gold immediately.

Abaji stands defeated and tries to reason his actions saying that other royalties do it too.

Kashi and Baji shut him up with their skilled words while the community demands to give him the death sentence.

Feeling scared for his life, Abaji folds his hands and requests Kashi to forgive him.

However, Kashi brings forth Bhiu and announces that Bhiu will be the one to decide Abaji’s punishment.

To get to know more, download Kashibai Bajirao Balal all episodes or watch online today's (5 May 2022) latest full episode, go to zee5.com