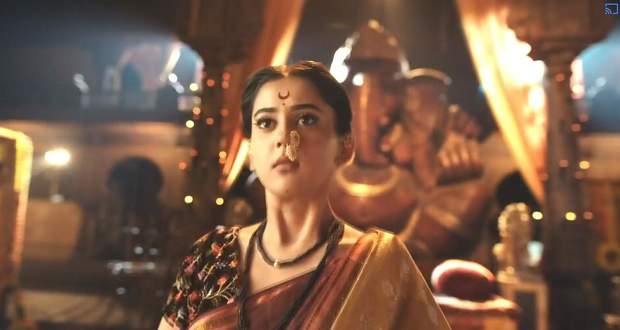 Today's Kashibai Bajirao Ballal 6th May 2022 episode starts with Kashi handing the Mangalsutra to Bhiu and telling her that the choice is in her hands now.

Bhiu walks to Abaji and tells him that she is ready to give him a second chance.

However, she states a condition that Abaji leaves behind all his bad habits and stays loyal to Bhiu.

Later, Kashi reads a scroll from Baji and gets ready to obtain her rights as his wife with excitement.

Meanwhile, Baji jumps into the lake to find the nose ring that he had brought for Kashi.

Further, Baji goes to Kashi's room where he holds Kashi's hand and brings her closer to him while apologizing to her for his harsh behaviour.

Moving closer, he puts the nose ring on Kashi's nose and brings her to the swing in bridal style.

Kashi expressed to Baji that it feels like she's in a dream while Baji holds her hands and tells her that it is real.

Baji firmly states that Kashi owns his heart from this moment and takes her to their bed to consummate their marriage.

The next morning, Kashi notices the three pearls in the nose ring and asks Baji about it.

Baji recalls asking for only two pearls and wonders why there are three of them.

Back in the present, Baji holds Kashi's face delicately and tells her that he had told the jeweler to put only two pearls in it indicating both of them.

At the same time, a soldier comes there and informs them that the messenger from the west has returned.

Elsewhere, Baji's brother feels frustrated for not being noticed while his wife, Ratna advises that they should go to her hometown.

A soldier comes there and tells him that a meeting is commencing and he is needed there.

In the meeting, the messenger informs that the army on the west side has been held captive by the opposing kingdom and needs their help.

Baji has half a heart of leaving Kashi alone while Kashi tells Suryaji to prepare for an attack.

Later, Kashi gets Baji ready for the attack and encourages him to return victorious while calming her erratic heart.

To get to know more, download Kashibai Bajirao Balal all episodes or watch online today's (6 May 2022) latest full episode, go to zee5.com