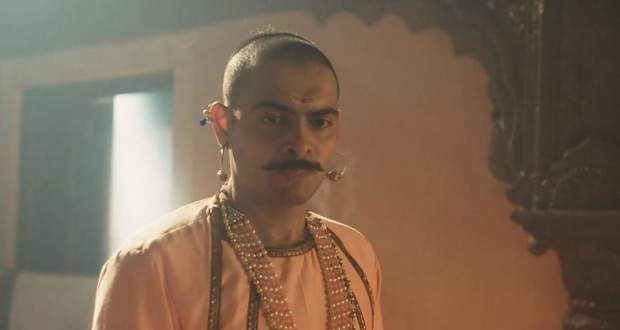 Today's Kashibai Bajirao Ballal 9th May 2022 episode starts with Chimaji coming to Baji and requesting him to give him a chance to prove himself by letting him lead the fight against the Sindhis.

Baji tells Chimaji that he cannot risk him getting injured while Kashi agrees with Chimaji thinking that it will increase his self-esteem.

The next morning, Radha is scolding Chimaji for deciding to go to war and risk himself while Chimaji says that he needs to prove that he is a warrior and not a coward.

Just then, Kashi comes there and feeds him sweet curd for good luck while Radha gives her blessing as she tells him to be careful.

Later, Chimaji leaves for the war while the soldiers and everyone else wish him victory.

At night, Kashi gets surprised to see the balcony decorated with seven circles of Diya's with Baji standing on the other side.

Baji holds Kashi's hand and brings her towards the Diya's while telling her that he is ready to promise the seven vows to her that he gave to her when they got married in childhood.

Further, Baji recites the vows as Kashi sheds tears out of pure joy seeing Baji accepting their relationship as husband and wife.

Baji hugs Kashi from behind and tries to kiss her after which they both admire the moon and spend their night together.

The next morning, Baji reads the scrolls in the courtroom stating that Chimaji had been attacked by the Sindhis and that a lot of their soldiers are killed in the attack.

Radha blames Kashi for sending Chimaji to the war while Chimaji returns from the war.

However, at the front gate, the villagers mock Chimaji and throw dung at him while calling him a coward.

Baji stops them saying that their actions are not correct and tries to console Chimaji.

Filled with self-loathing, Chimaji runs to the well and jumps inside to end his life.

However, Baji and Suryaji save him as the commoners demand punishment for Chimaji.

To diffuse the tense environment, Kashi says that she will punish Chimaji but Baji interrupts her saying that she cannot do that.

To get to know more, download Kashibai Bajirao Balal all episodes or watch online today's (9 May 2022) latest full episode, go to zee5.com