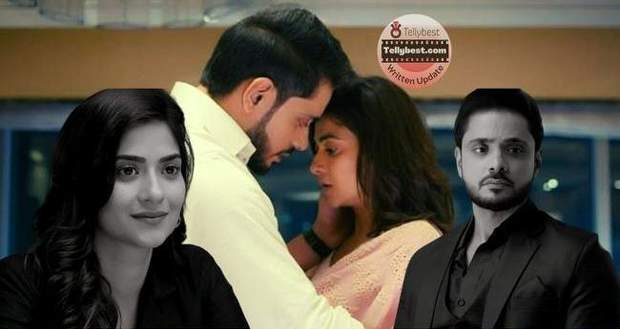 Today's Katha Ankahee 10th January 2023 episode starts with Viaan offering Katha a break in between the meeting and making an excuse of shopping.

However, Katha refuses the offer saying she can not afford anything from Dubai mall.

Katha Meeting Abdali and Other Investors

Later, Abdali is trying his hand at Hindi and praises Viaan for landing a gold mine in finding her as an employee.

Katha tells in a poetic way that one fiction becomes a long-living reality that is called Katha.

Viaan also adds that all stories cannot become Katha, Katha is only those stories that teach you something in life and leaves you with the impression of life.

Abdali praises Viaan for being a builder and poet at the same time and tells Katha that he has observed her poetry in her drawings.

Katha tries to show her presentation but Abdali stops her saying to chill for a while and they can see the presentation later, as they want to know about her more.

Viaan is silently watching Katha and her easy and happy nature with her clients.

Katha is one mystery that is keeping Viaan on his toes while refusing to show herself completely.

After a while, a loud crashing noise attracts Katha and others towards the noise.

It took Katha a moment to realise that the waiter might lose her job for falling and breaking the glasses and quickly reaches him before the manager and takes the blame and saves the waiter.

On being asked by Abdali, she tells him that she understands the fear of losing a job. She also points out that a mistake is a mistake that is done accidentally or because of some compulsion.

However, it is the job of the jury to realise the reason behind the mistake and not judge the person knowingly.

Viaan looks at Kathaa as if he has solved the riddle behind Katha.

Meanwhile, Abdali gets impressed and tells Katha that her philosophy, designs and she herself are simply “Khoobsoorat”.

Katha accepts their compliment with grace while Viaan feels jealous.

Abdali unknowingly tells Katha that he is happy that they decided to have this meeting here in Dubai instead of doing it online.

Katha looks complainingly at Viaan while Viaan looks caught but not apologetic.

Katha Finds Out About Viaan's Deception

Later, Katha angrily walks to her room while Viaan follows her recalling his deal with Katha.

In the lift, Viaan compounds his mistake by offering Katha 2 crore rupees to spend the night with him.

Katha looks offended and would have scolded Viaan but he tells her to not misunderstand him, as he only wants her to spend the night talking and knowing more about her.

He shares his misery with her telling her that he has so many conflicting questions for her and they are keeping him awake at night.

Vian tells her to give her answers and grant him the closure he craves.

Katha breaks the silence by asking him if offering her money will give him his answers.

However, Viaan tells him that he only wants to buy her time to see things from her perspective.

Katha tells him in a hurt tone that at this moment she feels cheap because of him who thinks that she is for sale however he is wrong because she is not.

Viaan realises his mistake too late while Katha leaves him standing in the lift.

Later, Viaan comes down the stairs but Katha has already left her room and is at the checkout counter ready to leave for the airport.

Viaan runs down the stairs while Katha sits in the taxi and leaves.

He tries to call Katha but she disconnects his calls every time.

Viaan sends the apology message to Katha and asks her where she is.

Afterwards, Viaan thinks of calling Ehsan but changes his mind having no words to express himself.

Meanwhile, the receptionist asks Viaan if he also would like to leave like Katha to which Viaan immediately agrees.

Viaan calls Jenny to prepone his flight and tells her to stay awake as he will update her about Katha.

Later, Viaan finds Katha sleeping in the airport lounge and feels relieved to see her.

He goes to get something for Katha to eat but hesitates to give her.

Later, he seeks the help of staff to give Katha food knowing that she will not accept from him.

After a while, the passengers of Katha’s flight are asked to board the plane.

However, Katha is in deep sleep and cannot hear the announcement.

© Copyright tellybest.com, 2022, 2023. All Rights Reserved. Unauthorized use and/or duplication of any material from tellybest.com without written permission is strictly prohibited.
Cached Saved on: Wednesday 25th of January 2023 01:27:22 PMCached Disp on: Monday 6th of February 2023 06:08:31 AM