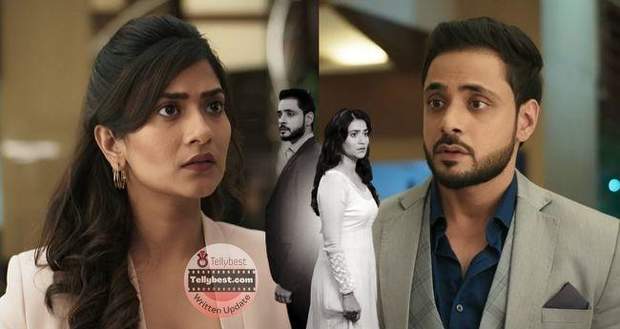 Today's Katha Ankahee 11th January 2023 episode starts with Katha waking up to hear the last announcement and hurries towards the plane, leaving Viaan and Viaan’s bought food behind.

Viaan follows her discreetly until they land.

At the airport, Viaan stops Katha by holding her hand and tells her to listen to his point of view if she does not want to tell him hers.

Katha looks furious and threatens to call security if he continues to follow her.

Katha stares at Viaan's hand, holding hers until he leaves it and walks away determinedly while Viaan watches her with sadness.

Meanwhile, Kailash wakes up calling Kavita and is surprised to see her gone.

On further enquiry, Reet tells him that Kavitha has left in the morning.

Kailash wonders where Kavita could have gone and asks his staff.

Later, the mystery unfolds when Kailash opens the Almirah and is shocked to see it empty of Kavita's clothes.

There is also a note from Kavita telling him to take his medicines on time.

He recalls his warning to Kavita who wanted to get to know about Aarav and thinks Kavita has gone to meet Aarav.

In the meantime, Katha calls Chandra Sir requesting him to find another job for her.

Just then, Katha’s neighbour brings holy sweets for Katha and Aarav and tells her that Aarav had too many years with oldies like her but now he should be spending his time with children of his age group.

Katha thanks her neighbour for the love she has for Aarav and enters the house.

Aarav is talking to Neerja at a speed of a hundred miles a minute while Neerja tells him to admit her to his team and she will take care of all the Kadhoos Uncles.

Just then Katha enters the room dressed in picnic gear and tells Aarav that they are going on a picnic.

Aarav gets super excited to hear the plan and tells Neerja to come with them but she declines telling them he should enjoy some alone time with his mother.

Meanwhile, Viaan returns to the office, looking haggard and walks dejectedly towards his office. Seeing Jenny he tells her to set up a meeting for 11 AM and asks her to inform Ehsaan.

Ehsaan becomes happy to hear about Viaan's return and assumes Katha to be with him.

He excitedly enters Katha’s room asking her about the trip but finds it empty.

Later, he comes to Viaan’s cabin hoping Katha to be with him.

However, Viaan is looking tired and defeated while taking medicine.

Ehsan suggests Viaan go home and he will do the meeting with Katha.

On being asked, Viaan looks uncomfortable and lies about Katha going home because of the hectic trip.

Ehsaan raises brows at the unexpected answer and praises him for being considerate for the first time.

Viaan looks busy and tells Ehsan that he will give all the details in the meeting.

Afterwards, he once again calls Kartha but her phone remains unreachable.

Meanwhile, Ehsan drops a message to Katha but finds it strange that it did not deliver.

Katha and Aarav on a Picnic

Elsewhere, Katha and Aarav have arrived at Aarav's father's favourite spot where Katha tells Aarav about the precious moments they spent here planning their future in the clouds.

Aarav looks surprised to hear about the future in clouds while Katha shows him various figures that take the shapes of their heart's desires.

She also tells him that it is the clouds that told them about him coming into their life and they went to the hospital and bought him home.

Katha also tells him about his visit here with his father Aditya, where they have seen his future in the clouds and the thousands of dreams that come with it.

Aarav excitedly tells her that he will fulfil all those dreams one by one because of his magical treatment.

Later, Aarav spots a tree and circles around them while Katha reads his intentions and encourages him to climb the tree.

Elsewhere, Viaan comes to Katha's room looking at her things, trying to see her in her things.

Viaan talks about her absence telling her that he does not know anything about her outside this office.

Sitting on her table, and staring at the unknown, he regrets crossing the line in an attempt to know her better.

Sighing in defeat, Viaan tries to call Katha but her number is unreachable.

Later, he calls Sunil asking him to give him Katha’s address saying he needs to send it to clients.

© Copyright tellybest.com, 2022, 2023. All Rights Reserved. Unauthorized use and/or duplication of any material from tellybest.com without written permission is strictly prohibited.
Cached Saved on: Wednesday 25th of January 2023 10:41:35 AMCached Disp on: Sunday 5th of February 2023 02:28:10 AM