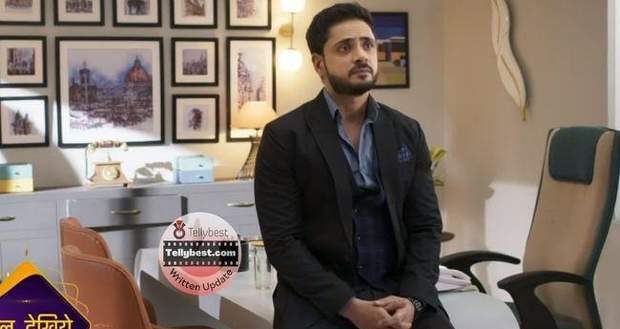 Today's Katha Ankahee 12th January 2023 episode starts with Katha helping Aarav to climb the tree by himself by giving him instructions on how he should regulate his hands and legs to climb upwards.

Aarav reaches the top of the tree but starts to breathe in a rushed manner as he looks downwards toward Katha.

Katha asks Aarav to listen to her so that he can come down by himself but Aarav starts crying as he gets scared of the height.

A few people gather under the tree hearing Aarav’s screams and a man proposes to bring Aarav down from the tree.

However, Katha says that Aarav will come down by himself and asks him to wait for her.

Katha takes out a blanket and asks the people to help her by holding onto it by spreading it out so that it acts as a net.

After the landing platform gets ready, Katha asks Aarav to jump from the top of the tree without thinking anything.

Aarav hesitates a bit but prepares himself as Katha asks him to trust her without having any second thoughts.

Aarav jumps into the blanket and screams in a victorious way saying that he succeeded in overcoming his fear.

Katha hugs Aarav and congratulates him for trusting his mother and doing as she asked him to.

Meanwhile, Kailash continuously calls Kavita but she does not pick them up as she is stern with her decision to not talk to him.

After Kavita’s friends ask her to pick up the call, Kavita goes aside and calls the maid to ask her if Kailash has taken his medicines.

Kailash calls Vijay and asks him to track Kavita’s mobile location and send him the address.

With regret in his eyes, Kailash says he cannot live without Kavita and will take her home with him.

At the same time, Viaan reaches Katha’s house and hesitantly knocks on the door only to see Neerja opening it for him.

Neerja asks Viaan what he wants from that residence while Viaan asks whether or not Katha is at home.

As Viaan hears that Katha is not at home, he asks Neerja to pass him a pen and paper and writes a sorry note dedicated to Katha.

Viaan tells Neerja to pass the note to Katha and leaves without telling her his name.

Later, at night, Katha learns about Viaan’s visit to her house and reads the letter he left asking for a last chance to explain himself.

Katha gets angry after reading the letter and spots Viaan standing outside waiting for her.

Viaan stares at Katha with hopeful eyes but Katha tears his note to show him that she wants him out of her life.

Viaan gets heartbroken and comes to Farah asking for some comfort as not receiving forgiveness is killing him inside.

Farah tells Viaan that to get forgiven by others, first one needs to forgive themselves and let go of the burden they are holding onto themselves.

Viaan hugs his mother dearly as she explains to him that sometimes a person has to let go of many things to get something.

Viaan gets an idea and thanks Farah for explaining things in so much detail to him.

Meanwhile, Katha talks with Shree about a job in her company and explains her situation as a single mother.

Shree gets a bit put off as Katha demands that she cannot work past office hours and weekends but tells her that she will let her know soon.

At the same time, Viaan calls Jeetu Bhai and tells him that Katha will lead the briefing in the next team as she is the soul of that project.

© Copyright tellybest.com, 2022, 2023. All Rights Reserved. Unauthorized use and/or duplication of any material from tellybest.com without written permission is strictly prohibited.
Cached Saved on: Wednesday 25th of January 2023 05:53:13 PMCached Disp on: Monday 6th of February 2023 01:30:30 AM