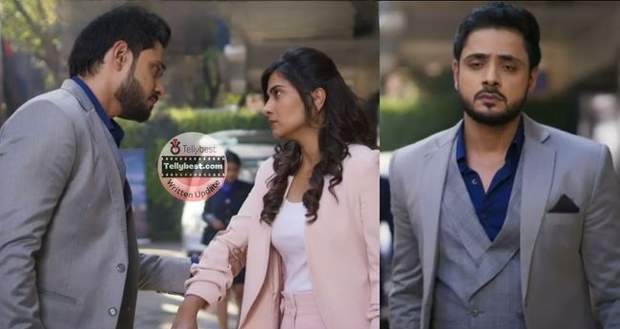 Today's Katha Ankahee 13th January 2023 episode starts with Katha coming back to the living room and hearing sniffling sounds coming from Neerja as she stands silently in the kitchen.

Katha approaches Neerja with a worried face and asks her why she is crying and if she wants to talk to her regarding anything.

Neerja turns around and points toward the kitchen where Katha sees onions lying on the chopping board.

Katha gets flustered as she realizes that Neerja was crying due to onions while Neerja bursts into laughter.

Neerja tells Katha that whenever life gets hazy with problems clouding it, one should just wash them out by crying.

Katha says that Neerja tells such deep meaning things while Neerja asks Katha what she wants to do right now.

Katha replies that she wants to be angry to her heart’s content to which Neerja passes her a magazine and asks her to tear the pages violently.

At Neerja’s request, Katha starts tearing the pages but finds it satisfying as all her anger finds its way out of her heart by doing that.

Neerja asks Katha the name of the young man for whom she is so angry and Katha replies with “Viaan Raghuvanshi”.

As Neerja asks Katha to talk to her about her problem, she says that Viaan is her boss and incredibly rude and cruel.

Neerja encourages Katha to find another job after she learns that Katha has left her current job and asks her to settle for a nice boss.

However, Katha starts to rethink everything as Neerja says that her new boss should pick her up every day and write apology letters to her.

On the other hand, Kavita expresses her viewpoint to Kailash and tells him to come to her when he is ready to talk about “them” instead of “him”.

The next day, Ehsaan comes to Viaan and asks him what happened in Dubai which made Katha resign from their company.

Viaan refuses to say anything and assures Ehsaan that he will solve everything but Ehsaan makes Viaan realize that Katha is already searching for other jobs.

Ehsaan asks Viaan how he can let go of Katha when he is aware of how much she means to the company and him.

Viaan asks Ehsaan to repeat his words to which Ehsaan replies that he likes Katha and feels for her.

Viaan loses control after hearing Ehsaan and asks him what he will do if there is another person in Katha’s life.

Ehsaan says that only Viaan is in Katha’s life and if needed he will throw him out to make his position.

After Ehsaan leaves to meet Katha somehow, Viaan desperately thinks about what he should do and calls Chandra Sir.

Meanwhile, Katha watches Aarav playing cricket with other boys and notices wounds on his knees after he returns.

Aarav mentions getting double gifts every birthday which leaves Katha in tension as she is unemployed right now.

On the other hand, Chandra Sir tells Viaan that he could not value Katha and her talent which cost his company such a loss.

Viaan says that he wants to clear everything up and asks Chandra Sir to do a favor for him.

© Copyright tellybest.com, 2022, 2023. All Rights Reserved. Unauthorized use and/or duplication of any material from tellybest.com without written permission is strictly prohibited.
Cached Saved on: Wednesday 25th of January 2023 12:04:12 PMCached Disp on: Monday 6th of February 2023 04:53:51 AM