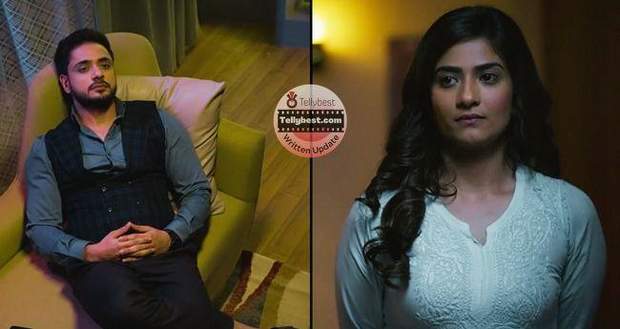 Today's Katha Ankahee 16th January 2023 episode starts with Katha arriving at Chandra Sir’s office and thanking him for giving her a job in his company and complimenting him for being a great mentor to her.

Chandra Sir asks Katha to turn around after which she spots Viaan sitting on the sofa and staring at her.

Chandra Sir tells Katha that he did what he thought would be best for her and leaves Katha and Viaan alone to talk to each other.

Viaan gets a bit worked up and says he did this last wrong thing so that he can make everything wrong until now into the right ones.

Katha tells Viaan that he laid a trap for her so he can win her again this time for his self-satisfaction.

Viaan denies doing anything like that and says that he wants Katha to understand that he regrets his past actions and feels guilty about that.

Katha says that she is not interested in getting a job from him and proceeds to leave but Viaan stops her by asking her why she came to him that night.

Katha pauses in her steps and turns around while Viaan, unable to control his emotions, says that he knows she is not like those opportunists.

Viaan says that he could not understand why Katha accepted such an atrocious offer from his side and even returned 83 thousand back to him.

Katha sits on the sofa while Viaan begs her to tell him what she did with that money as he is going crazy with each passing moment thinking about the reason.

Bursting in a laugh, Katha tells Viaan that he was the one who made the offer and is now trying to remove his guilt for it.

Katha asks Viaan why he should be the only person to make decisions, have power, and pamper himself and his ego over time.

Viaan stares at Katha blankly as Katha asks him to live with his guilt for his entire life as she has no guilt from her side for what she did.

As Viaan remorses for his actions, Katha returns for her bag and tells Viaan that he should prepare to answer God for his actions and justify himself.

Meanwhile, Kailash tries to convince Kavita by saying that she is amalgamated in his “my, mine, me” as he is incomplete without her.

As Kavita asks Kailash about his behavior with Katha and Aarav, Kailash defends himself by saying that Katha rejected him at the time he was trying to help her.

Kavita reminds Kailash how he threw Katha out of his house when she came to ask for help despite being called a gold digger.

Kailash realizes his mistakes as Kavita tells him that they should compensate for the lack of love from their side.

At the same time, Viaan goes to the gurudwara and polishes people’s shoes so that his guilt reduces a bit.

An old man advice Viaan to be patient and wait for God to carry out the right thing as a sincere wait will bear good fruit for him.

Ehsaan calls Katha and convinces her to meet him somehow on the condition that Katha will give him the time and place, and Viaan is not allowed.

While leaving, Ehsaan bumps into Viaan and tells him that he is going to meet Katha as he wants her to stay in his personal life.

Viaan stands there with empty eyes as he watches Ehsaan leave with a smile.