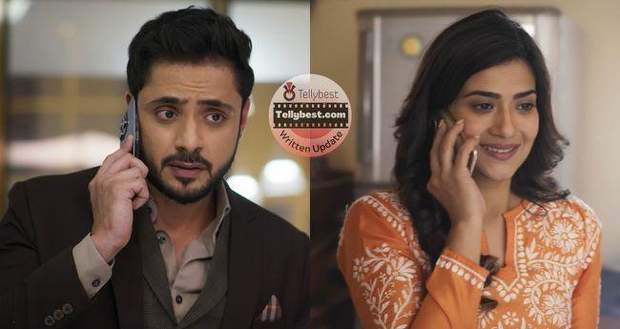 Today's Katha Ankahee 17th January 2023 episode starts with Katha sitting at the coffee shop while Ehsaan reaches there and greets Katha with a smile.

Katha looks around anxiously to be sure that Viaan has not come there with Ehsaan until he himself assures Katha that Viaan is nowhere near them.

Katha tells Ehsaan that she thinks that he and Viaan are married to each other and have vowed to be together forever.

Ehsaan cracks up on listening to Katha’s joke and assures that he is single and still the most eligible bachelor in the market.

Katha asks Ehsaan why he has called her there to which Ehsaan tells her that he considers her his friend but they only met at the office.

Changing the topic, Ehsaan tells Katha that even if she decides not to come back to Earthcon, he wants her to be there in his personal life.

Katha frowns hearing Ehsaan while he explains to Katha that he just wants her to remain as his friend with whom he can talk his heart out.

Katha tells Ehsaan that she is already his friend but Ehsaan says that Katha has to do a ritual to be his true friend.

Ehsaan asks Katha to put her hand over her coffee mug and to promise to tell him all her problems and whatever happened in Dubai when she is ready.

Katha assures Ehsaan that she can handle things on her own and will not need his help.

Meanwhile, Reet announces that she has planned a grand party for Kavita’s birthday which is the next day.

Reet and Yuvraj ask Kailash about his gift to Kavita to which Kavita says that he already knows what she wants.

Kavita says that she wants to celebrate her birthday with her entire family and asks Kailash to meet Aarav once.

Kailash asks Reet to add Katha and Aaarav to the guestlist which ruins Reet’s happy expression.

Kavita hugs Kailash and thanks him for doing that much and decides to invite them by herself.

After Kavita leaves, Kailash assures Reet that she is the daughter-in-law of the Garewal family but Reet gets upset.

Later, Katha finds Kavita laughing with Aarav and Neerja at her house and joins them to discover that Kavita wants to invite them to her birthday party.

Kavita tells Katha that she wants to mend all relationships related to Aditya that are still jumbled up as he is gone now.

After Kavita leaves, Neerja advises Katha to let go of past issues as elders can act more stubborn than children sometimes.

On the other hand, Tejji asks Viaan to come to Kavita’s birthday party as she is her and Farah’s close friend.

Viaan agrees to accompany them after seeing Tejji’s sad face which lightens up hearing Viaan.

The next day, Aarav gets ready to go to the party and learns that Katha is not willing to go with him.

Aarav says he will not go without her as they promised Kavita that both of them will attend the party.

© Copyright tellybest.com, 2022, 2023. All Rights Reserved. Unauthorized use and/or duplication of any material from tellybest.com without written permission is strictly prohibited.
Cached Saved on: Wednesday 25th of January 2023 01:48:14 PMCached Disp on: Wednesday 1st of February 2023 10:13:12 PM