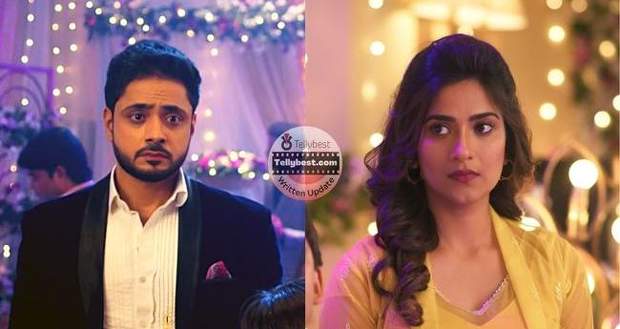 Today's Katha Ankahee 19th January 2023 episode starts with Kavita calling Kiara and asking her to play with Aarav as he is her little brother.

Kiara hugs Aarav and takes him with her so that they can play together while Tejji and Farah engage in their talk with Katha.

Tejji tells Katha that they felt so inspired after hearing her story and want her to be the face of their NGO.

Farah says that she and Tejji’s sons also love to do charity work and would have loved to meet Katha.

Katha asks Farah and Tejji where their sons work to which they tell Katha that their sons are heads of an architectural firm.

Katha replies that she is an architect which impresses Tejji and Farah greatly and they ask her where she is working currently.

Kavita interferes and tells Tejji and Farah about Katha’s endless sacrifices for the sake of Aarav and arranging money for his treatment.

Kavita says that they were of no use to Katha as she alone managed the money which was more than 1 crore.

Before Katha could talk about her working in Earthcon, a girl comes and asks Farah and Tejji to come and talk with them a bit.

Meanwhile, Reet feels angry due to all the attention received by Katha and Aarav and spots Aarav playing with Kiara and others.

Reet asks Aarav to rest as he should not play around too much due to his recovery phase.

Kailash spots Reet trying to isolate Aarav while he assures her that the doctor has allowed him to play around as much as he wants.

Interfering between Reet and Aarav, Kailash asks Reet to let Aarav play and asks her to leave seeing that Reet is doing that intentionally.

Kailash and Aarav sit together and discuss cricket and discover that both of their favorite cricketers as Virat Kohli.

Later, Katha decides to leave the party with Aarav as the night passes and asks Aarav to bid goodbye to his grandparents.

Aarav says goodbye to Kavita and Kailash while Katha asks Kavita to come aside for a bit so that they can talk.

Katha returns Kavita the antique bangle she gave her for Aarav’s treatment and says that she only deserves to keep it.

Kailash and Kavita get emotional after getting to spend time with Aarav while Katha and Aarav leave the party.

Later, Katha and Aarav enjoy their kulfi date together while sitting on a bench under the night sky.

Katha tells Aarav that his father’s favorite flavor was also rabri and they often ate kulfis like now.

Asking Aarav to look at something, Katha steals a bite from his kulfi after which Aarav runs away with Katha’s kulfi.

Aarav laughs at Katha and eats both kulfis while Katha says that he is just like his father, Aditya.

Meanwhile, Ehsan and Viaan apologize to each other as they cannot stay mad at each other for long.

Ehsan and Viaan look into the new resumes as they need to appoint a new employee in place of Katha.

Viaan tells Ehsan that no one is compatible from the given resumes and watches the presentation slides where Katha is seen.

Just then, Tejji and Farah come back and tell Viaan and Ehsan about their meeting with an amazing single mother.

While trying to remember her name, Tejji spots Katha on the slide and says that is her which leaves Viaan and Ehsan shocked.

Tejji and Farah reveal that Katha is a single mother of a son who struggled a lot due to her son’s blood cancer.

Viaan feels his soul crumble into pieces as he hears that Katha managed to arrange more than 1 crore for her son’s treatment.