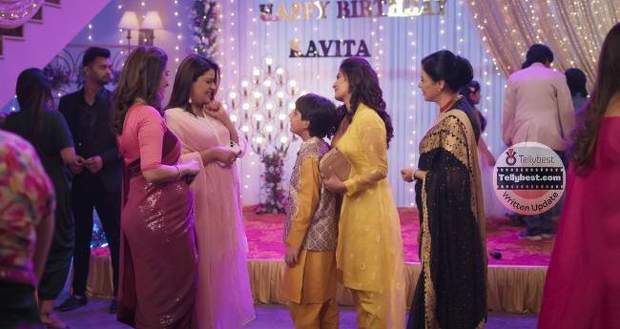 Today's Katha Ankahee 20th January 2023 episode starts with Viaan’s eyes turning red in horror as he hears Tejji and Farah saying that Katha must have struggled to fight for her son’s treatment and recovery.

Viaan gets chained in guilt

Viaan leaves that room and comes downstairs with his hands trembling in guilt as he realizes that he is no one different from his father, Viraj Raghuvanshi.

A flashback shows Viaan watching his parents arguing with each other and Viraj gives money to Tejji to live with Viaan as he wants to live with his new affair.

Tejji tells Viraj that he cannot just buy her pride as a wife and mother with some mere money and asks what will happen to their son as he watches them.

Viaan trembles in fear seeing his mother begging his father not to leave as she loves him and wants to raise Viaan together.

Tejji screams in agony as Viraj leaves after saying that he is happy and Viaan will also become like him if he wants to be happy.

Viaan runs to Tejji and hugs her with tears fogging his vision as Tejji holds him tightly and says that he will never become his father, never in this lifetime.

Back to the present, Viaan says that he is not happy even after becoming like Viraj and finds himself at the bottom of a bottomless pit from where he can never go back.

“Disgusting!”, that’s how Viaan explains himself as he remembers how he took advantage of Katha for his selfish satisfaction.

Viaan stares blankly down from the balcony and steps toward the railing as the cold night breeze touches his cold tears.

Thankfully, Ehsan comes at that moment and distracts Viaan from taking any extreme step.

Viaan asks Ehsan to leave him alone for a bit as he is confined in chains of guilt and self-hatred.

Viaan attempts to apologize to Katha

Later, Viaan waits for Katha outside her house and feels choked out of the air as he watches her walking toward his direction.

Viaan stops Katha and says sorry with his trembling voice as no other words come out of his mouth.

Katha turns around and asks Viaan not to say anything as she is not interested in talking to him at all.

However, Viaan says that he was unaware that she was a single mother who was struggling with her son dealing with cancer.

Katha pauses in her steps while Viaan struggles to breathe as he continues his words with his soul going through tremors.

Viaan says that he has committed a crime by putting Katha through such trauma while a small child was fighting for his life.

Viaan screams in sorrow that if he had known that Katha was in such a situation, then he would have helped her wholeheartedly.

Katha says that Viaan cares about her situation after knowing that she is a mother or else there is no respect for her pride in front of him.

Viaan struggles to find words to defend himself while Katha asks him if he would have felt guilty if she was not a mother and wanted the money for herself.

Katha says that she can give her life for her child but Viaan had no situation forcing him to do what he did.

Viaan clutches his heart painfully with tears running down his eyes as Katha asks him to think of what he will say to his mother and God.

After Katha leaves, Viaan gets into his car and goes to the dark and cold office in the middle of the night.

Katha enters her house and hugs Aarav while tears come out of her eyes as she gets reminded of selling her self-respect to Viaan.

Aarav pats Katha as he says that he will protect her as the man in her life making Katha cry more.

The next day, Katha hears from one of the companies where she applied for a job and celebrates a new beginning as she gets the job.

Meanwhile, Jenny finds Viaan sitting on the balcony of his office after which he instructs her to proceed with Katha’s relief as he will not force Katha anymore.