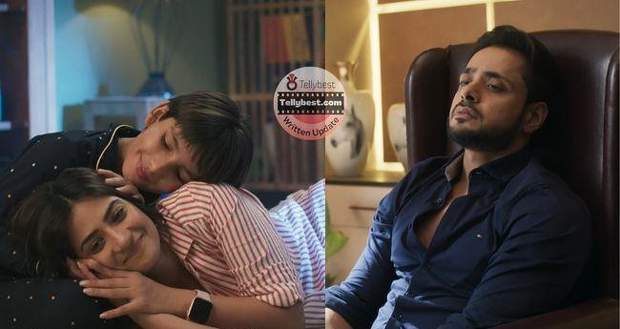 Today's Katha Ankahee 24th January 2023 episode starts with Ehsan welcoming Katha to the office and asking her why she has again resumed her habit of not picking up his calls.

Ehsan does not pressure Katha into talking about Aarav’s matter but asks Katha to at least let him know if she is going through some problems.

Katha follows an employee for the handover process and goes to her cabin at that employee’s request.

As Katha waits for someone to enter, Viaan comes inside her cabin and says that he takes the exit interviews in their company.

Viaan tells Katha that he came to her cabin because he thought that she would feel uncomfortable in his cabin.

Katha says she is no longer the lead designer there, so she does not feel comfortable anywhere in that office.

Viaan says that generally he asks people why they decided to leave their company but he will not do so with her as he knows that he is the reason.

Katha asks Viaan if he has anything more to say to which Viaan replies that he has always thought about himself, leading him in the wrong direction.

Viaan tells Katha that he thought about her for a while and concluded that whatever is happening is wrong for Katha.

Viaan asks Katha who is “Viaan Raghuvanshi” to decide her future and career when she is the one who has worked so hard to build that.

Katha hears silently while Viaan says that Katha’s everything is determined by her work, her expertise in the project, and her co-workers.

Viaan states that Katha should stand proud against him and lead the project with her team as she knows how to fight.

Katha is left in deep thinking after Viaan leaves saying those things and attends the briefing where she explains the plan to the other employees.

The employees complain about this and that and say that they view that project as impossible after Katha has decided to leave.

After the meeting gets over, Katha goes over the slides of the Dubai Heritage Project and gets a bit emotional seeing her hard work slipping away.

While walking away from the office, Katha hears the employees talking about losing their jobs if they fail to complete that project.

Katha remembers Viaan’s words and announces that she wants her job back after coming to Viaan.

Viaan gets happy but that smile soon disappears as Katha says that she will not work with him directly as she felt harassed by him.

After accepting Katha’s condition about not forcing anything on her and giving her time for her private life, Katha leaves while Viaan feels relieved a bit.

Viaan watches everyone congratulate Katha downstairs while he stands alone in his cabin without anyone to share his happiness with.

Ehsan jumps on Viaan’s back and thanks him for convincing Katha as that is the best thing he has done.

Viaan says that seeing him and Katha happy is enough for him to smile.