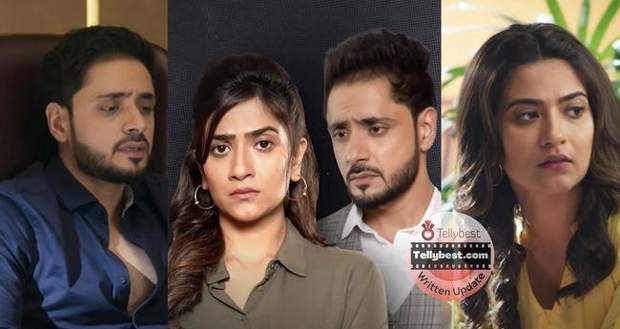 Today's Katha Ankahee 25th January 2023 episode starts with Aarav and Neerja returning home with Aarav in an angry mood as Katha broke her promise to come to eat lunch with them.

Neerja tries to calm down Aarav by luring him with ice cream but Aarav demands to talk with Katha over a video call.

Trying to decrease Aarav’s anger, Neerja tells him that adults have bigger problems that cannot be solved by showing their cute faces.

Aarav calls Katha but refuses to look at her as he will soften her after he watches her cute face.

Katha convinces Aarav to see her and promises him that she will not be absent after office hours from now on.

Aarav says that is ok after he hears that Katha will bring pizza with her while Jenny calls Katha to go to Ehsan’s cabin as he has asked her to be there.

Tejji and Farah tell Katha that they wanted to help her in getting a job in their sons’ company but she already works there.

Katha gets to know that Viaan and Ehsan are Tejji and Farah’s sons respectively while Farah asks her about their proposal earlier.

Tejji says that they want Katha to become the face of their NGO but Katha refuses her offer and says that she does not want to recall her struggles with cancer.

Viaan feels bad again as he knows why Katha wants to forget everything and leaves after making an excuse.

With Ehsan and Katha leaving for lunch, they eat together while Ehsan asks Katha how she managed such a huge amount of money by herself.

Katha says that she does not want to talk about that anymore after which he changes the topic and discusses other things.

The next day, Aarav gets ready for his first school day and accepts both Falguni and Neerja’s tiffin as they fight over that.

Kavita visits Aarav and gives him many gifts including a tablet which upset Katha a bit.

Asking Aarav to check his books, Katha tells Kavita that she does not want to make Aarav habituated with such lavish things.

Katha calls Kailash and tells him that Aarav did not have any male companion in his family till now.

Kailash gets emotional as Katha asks him to spare some of his time for Aarav as that will be more precious to him.

Later, Ehsan visits Katha and others while they discuss things in a meeting while wearing red which is Katha’s favorite color.

Viaan enters the room and announces that two new women are about to join their company; they are both mothers and have achieved many things while managing their children.

Katha feels surprised on hearing such a thing from Viaan while Ehsan and the other employees understand what the matter is.

© Copyright tellybest.com, 2022, 2023. All Rights Reserved. Unauthorized use and/or duplication of any material from tellybest.com without written permission is strictly prohibited.
Cached Saved on: Wednesday 25th of January 2023 11:56:29 PMCached Disp on: Tuesday 31st of January 2023 07:24:54 PM