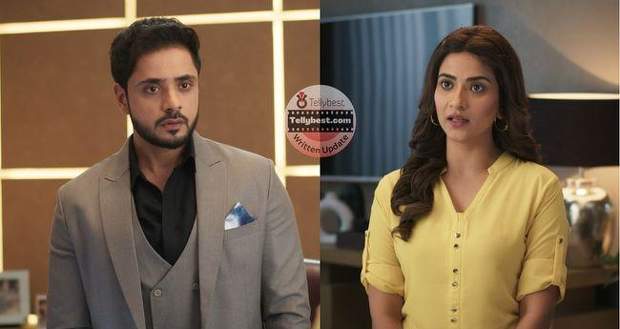 Today's Katha Ankahee 26th January 2023 episode starts with Viaan announcing that he wants some reforms to take over the company so that all the women employees of Earthcon can get access to more facilities and opportunities.

Viaan tells everyone in the conference room that he wants every woman with a family or children to work freely in his company.

Ehsan tells Viaan that they have never discriminated between male and female employees in their company.

Viaan agrees with Ehsan but points out that they have never given female employees a fair opportunity either.

Viaan says that the women who are in senior positions have either sacrificed their personal lives or do not have children.

Questioning why women who need to give a bit more time in their personal life should not be given the same spotlight as others, Viaan says that he pledges to change this problem.

Viaan says that Earthcon will be a company where every woman gets the same opportunity for their career regardless of their family.

For that to happen, Viaan announces that women will be given flexible working hours and the option of working from home along with maternity leave of 9 months.

Everyone stands up while clapping for Viaan’s decision while Ehsan seems to be a bit confused after hearing Viaan.

Katha also feels proud and happy on hearing Viaan’s announcement as she thinks that Viaan is trying to change himself.

After a bit, Ehsan comes to Viaan’s cabin and asks him why he took such a decision while Viaan talks with an employee who says that those adjustments were made for Katha.

Viaan tells the employee on the call that he did everything for their welfare and asks her to never speak like that.

Ehsan asks Viaan what he is doing there when Viaan has decided to do everything according to his will.

Viaan asks Ehsan if what he did was wrong to which Ehsan replies that Viaan’s way of doing it was wrong.

The office’s hot gossip that Viaan is doing undue favors to Katha seems to be true after what he just announced.

Ehsan asks Viaan what happened between him and Katha that made him change so drastically but Viaan does not answer him.

At the same time, Reet tells Yuvraj that Katha is targeting to enter their house by using Kavita and Kailash but Yuvraj asks her not to overthink.

Kailash visits Aarav’s school and gets emotional watching him hug another child’s grandfather.

Coming to Katha, Ehsan asks her how Viaan, who does not consider women anything more than gold diggers, has changed so much that he is protecting women’s rights now.

Katha asks Ehsan if he is calling Viaan sexist but Ehsan refuses and tells Katha the entire story of Viaan’s past.

As Ehsan narrates how Viaan’s father abandoned him and Tejji for a younger woman when he was twelve, Katha’s eyes gradually grow wider with shock.

Ehsan tells Katha how Viaan told him that the mistress did some black magic to his father and finished him in the end.

Katha plays cool and tells Ehsan to marry Viaan if he is that much worried about him leaving Ehsan silent.

After returning home, as Katha, Aarav, and Neerja enjoy their movie night, Ehsan gives a surprise visit with dinner.

Aarav gets weary of Ehsan and acts savagely toward Ehsan whenever he says something to Aarav.

Meanwhile, Tejji arranges a family meeting where she introduces a girl named Sneha to Viaan.

Viaan comes to his room after acting coldly with the guests while Tejji tries to convince him to meet with girls a few times for marriage.

Viaan freezes in his spot as Tejji asks him if he is behaving like that because of Katha.

© Copyright tellybest.com, 2022, 2023. All Rights Reserved. Unauthorized use and/or duplication of any material from tellybest.com without written permission is strictly prohibited.
Cached Saved on: Thursday 26th of January 2023 11:57:13 PMCached Disp on: Thursday 2nd of February 2023 08:50:37 PM