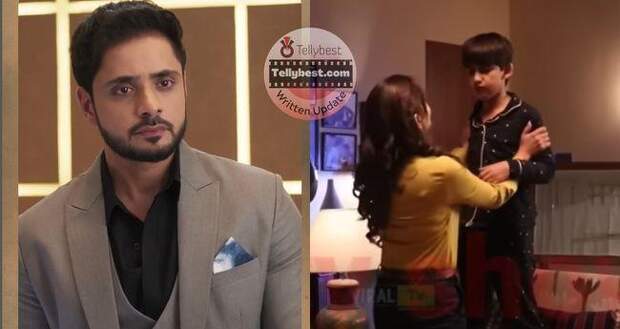 Today's Katha Ankahee 27th January 2023 episode starts with Katha preparing the dinner table while Ehsan sits with Aarav trying to be friendly with him.

Ehsan asks Aarav how his school is going to which Aarav replies that he is enjoying his new school life along with cricket.

As Ehsan confesses that he also likes cricket, Aarav asks him who has the record for maximum centuries in ODI.

Aarav says that Katha watches it because of him after which Ehsan asks him what other things Katha likes.

Aarav tells Ehsan that Katha likes hiking and glares at him as Ehsan keeps staring at Katha while she works in the kitchen.

After the dinner table gets set, Aarav stares at Ehsan acting close to Katha and tells Neerja that he finds Ehsan very weird.

Aarav and Neerja plan to keep their eyes on Ehsan as Aarav is the only man in his mother’s life.

The next day, Jenny asks Katha to present the project plans to Viaan directly as it is an extended weekend but Viaan calls Katha and tells her to talk to him through a video call.

Katha gets the flashback of Ehsan telling her that Viaan hates women but she has left a deep impact on him and agrees to do the video call.

While talking on the video call, Katha gets calls from Neerja continuously and hangs up her meeting after telling Viaan that she will send him the rest later.

Neerja asks Katha if Aarav is with her as he was not in the van that came from his school.

Katha gets a bit nervous and calls the school teacher asking her if Aarav is still in the school.

Aarav’s teacher calls a bit later and informs Katha that Aarav is nowhere in the school as she is checking everywhere by herself.

Katha starts panicking as she leaves the office in a hurry while Viaan spots her and comes to her help.

Viaan joins Katha in the search, leaving for Aarav’s school together in Viaan’s car.

Viaan helps Katha to keep her senses on track and says that nothing has happened to Aarav and they will soon find him.

After Katha and Viaan reach Aarav’s school, the security guard and the teacher inform them that Aarav is not in the school.

Katha loses her control over emotions while Viaan assesses the situation intelligently and asks the teacher to show them the CCTV footage.

As they watch the CCTV footage, Katha gets scared after seeing Aarav getting into the wrong van while Viaan dials the driver’s number.

The driver picks up after several tries and tells Katha and Viaan that a car stopped his van and Aarav himself went away with that person.

Katha starts crying in worry after hearing that but Viaan asks her to think rationally while they return to check CCTV again.

Katha gets continuous calls from Kavita and gets to know that Aarav is with Kailash as he brought him there from the wrong school van.

Hearing that, Katha relaxes completely and leaves for Kavita’s house but Viaan says he will drop her off.

Viaan tells Katha not to let her stress show in front of Aarav as children observe their parents’ emotions all the time and take them to their hearts.

Katha remembers Ehsan’s narrative about Viaan’s past and gets to see a new side of him.

After reaching, Katha genuinely says thank you to Viaan for helping her, bringing a smile to Viaan’s face.

© Copyright tellybest.com, 2022, 2023. All Rights Reserved. Unauthorized use and/or duplication of any material from tellybest.com without written permission is strictly prohibited.
Cached Saved on: Friday 27th of January 2023 11:58:16 PMCached Disp on: Thursday 2nd of February 2023 09:07:35 PM