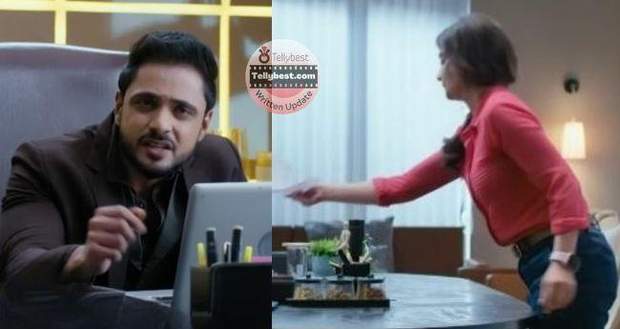 Today's Katha Ankahee 28th December 2022 episode starts with Katha picking up AAarav's shoe and thinking to herself that Aarav will be the first monkey ever who will run with sports shoes on.

She then goes to AAarav and puts on his shoes.

Aarav innocently asks her to tie it loosely as it will pain otherwise.

Katha explains to him that the true fruit of life is incomplete without a little pain.

However, Aarav says that the word chemotherapy is so big and scary and he has also seen in movies how people have to go through many painful procedures during the surgery.

Katha tells him that life is nothing without adventures and that now he'll transfer into the hero's ward.

It is a secret room and is only accessible to those kids who are brave and heroes and Aarav will gain magical powers after the chemotherapy.

Katha creatively explains the complete medical procedure to Aarav but makes sure that she only uses fantasy words like outer space, planets and magic.

Aarav gets very excited about it and asks if Katha will be present during it and she assures him that she will be.

Meanwhile, Viaan finds out that Katha hasn't arrived yet and storms into his office.

On the other hand, Katha gets a notification on her phone that she has only 3 thousand rupees left in her account.

Viaan asks his assistant to call all the department heads of the Dubai project in an hour for a meeting including Katha.

Jenny informs Katha about the meeting at which Katha gets furious when Falguni enters and asks her about the issue.

Irritated Katha replies that her boss feels as if he owns her.

Falguni bhen consoles her but also tells her that there is something troubling her that she's hiding.

Meanwhile, Viaan is irritated before the meeting because of Katha's prolongation and before they could start the meeting, Viaan angrily calls it off.

Katha finally reaches the office hurriedly and goes to Viaan.

Viaan angrily says that she was the one who promised that nothing will compromise her work because of what happened.

He then mocks her and asks her to hire someone else who can be more punctual as now she's a millionaire.

However, Katha tells him that since he's her boss, she is bound to give him an explanation and so she tells him that the meeting was not scheduled for that day and because of that she took a leave to attend to another urgent business.

Later, she hands him over her resignation and returns him eighty-three thousand as all she needed was 1 crore, 2 lakhs and 17 thousand and not 1 crore and 3 lakhs.