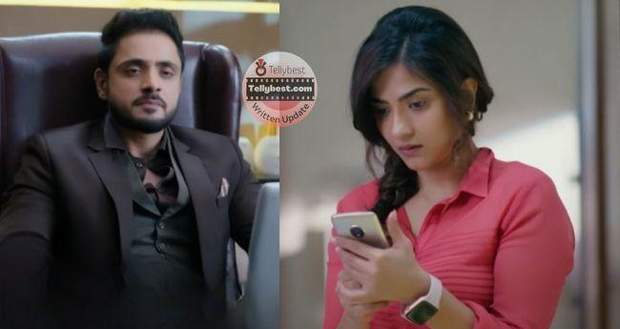 Viaan is unable to comprehend the situation and watches Katha leave the office.

Katha's actions put Viaan in deep thought and he keeps reminiscing his past memories with Katha.

He wonders why Katha returned the remaining 83 thousand if all she wanted from him was money. He gets shocked at Katha's selective loyalty.

Viaan calls Jenny to send an official email to Katha, accepting her resignation.

Meanwhile, Katha reaches the hospital where Falguni Bhen greets her and tells her that Aarav is feeling very weak which is a common side effect of chemotherapy.

Katha goes inside Aarav's ward and asks him in a whisper if he's feeling nauseous or weak.

Realizing the implications of the magic treatment, Aarav tells Katha that he got too scared during the procedure thus feels that he doesn't belong to the hero ward.

Katha manages to console him by saying that all superheroes are initially scared but once they face their fear, everything falls back into place.

Aarav asks Katha to promise him that she won't leave his side till the surgery is completed.

Katha tells him that no matter what, she will never leave his side.

Back at Earthcon, Ahsan tries to make Viaan understand that Katha has always been a diligent and hardworking employee and Viaan shouldn't have overreacted and made a scene.

Ahsan blames Viaan for firing Katha at which Viaan tells him that he didn't fire her but just approved her resignation.

However, Ahsan tells Viaan that Katha is the head of the Dubai project and is of great importance for the company.

Viaan stubbornly sticks to his words and asks Ahsan to do whatever he wants but he will not have Katha back.

Meanwhile, Doctor Amit assures Katha that everything is fine for the moment, and she should just sit back and relax.

Katha dodges Ahsan's calls while Amit explains Katha the need to spend time with Aarav after the surgery because he will need her more than ever.

Concurrently at Garewal's house, Yuvraj tells Kailash that he can make their hotel better by hiring a chef from London.

Kailash sarcastically agrees with Yuvraj and then tries to explain to him the nostalgia of old authentic dishes.

Reet interrupts and says that she completely agrees with Kailash.

She continues to say that she values vintage items like her mother in law's bangles and asks Kavita to give her the bangles.

Reet did this with the intention of revealing the truth that Kavita had given the bangles to Katha.

Realizing that the cat is out of the bag, Kavita confesses that the bangles aren't in the locker.

Reet immediately starts making a scene by manipulating Kailash and Yuvraj that Kavita might have given the family bangles to someone else.

Kailash angrily tells Reet that the bangles belonged to Kavita and her family, so it didn't matter if she owns it or has thrown it into the sea.

His statement shuts Reet's mouth, and he gets up and explains to her that she shouldn't question the elders.

Meanwhile, at the Cafe, Rewa asks Katha to think about the entire incident with an open mind. She also tells her that Ahsan wants to make things back to normal.

Katha is inconsolable and says that now she wants to rest and spend time with Aarav for some time now.

© Copyright tellybest.com, 2022, 2023. All Rights Reserved. Unauthorized use and/or duplication of any material from tellybest.com without written permission is strictly prohibited.
Cached Saved on: Wednesday 25th of January 2023 01:17:21 PMCached Disp on: Wednesday 1st of February 2023 06:28:50 PM