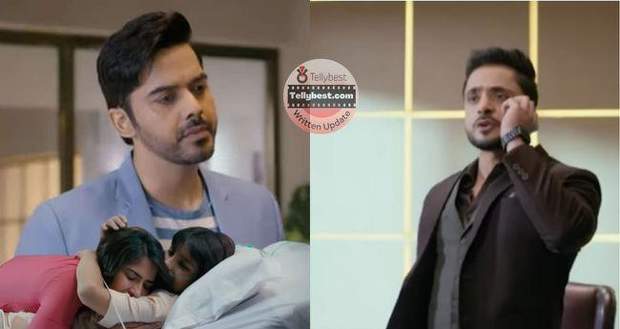 Today's Katha Ankahee 30th December 2022 episode starts with Farah massaging Viaan's head when he tells her that it has been a stressful day for him.

She asks him to share what's bothering him, but Viaan immediately changes the subject and tells her that she needs to read all the NGO-related papers and then put her signature on them.

Farah says that she will not read the papers but just put her signatures on them.

She then tells Viaan that Viraj uses to pamper her a lot by not letting her read any official papers and simply asking her to put her signature on the respective pages.

Hearing this, Viaan gets upset.

Farah starts pestering him to tell her what is going on in his mind.

After some hesitation, he asks her that has she forgotten that Viraj has abandoned her even though she loved him more than anything.

Farah defends Viraj and says that Viraj got trapped in the clutches of an evil woman with whom he ran away.

Farah continues and blames the woman for whom Viraj left Farah.

Farah says that the other woman had two options, One was the right option and the other one was to destroy Farah's household; however, she chose the latter.

Viaan looks at Farah hopelessly and tells her that Viraj was at fault too because he didn't think the situation through.

Farah gives a chuckle and says that men don't think whenever they are in a compromised situation and don't understand the sacrifices a woman makes on a daily basis.

Farah says that she feels pity for his husband, not anger.

Viaan gets thoughtful and hugs Farah's leg and tells her that she is the best.

Meanwhile, at the hospital, Amit tells Katha that everything is prepared for the surgery, and he wants to introduce Aarav's donor to her before the procedure.

Amit gets interrupted by an unknown female doctor who enters the ward and says that she will operate on Aarav right there.

She turns to Amit and says that the donor hasn't arrived and thus they will use an animal's bone marrow.

Aarav gets scared and asks for a monkey's marrow.

Katha and Amit also play along with her joke but then a nurse enters with balloons and cake and the unknown doctor sings happy birthday to Aarav.

Amit tells Katha that her name is Neerja, and she is actually Aarav's donor.

Aarav then tells Neerja that it isn't his birthday today to which Neerja replies that after today he'll be gifted with a new life.

Aarav then cuts his cake, and everyone celebrates along with him while Neerja cheers Aarav and everyone else.

Back at Viaan's office, Viaan sits thoughtfully and is interrupted by Jeetu and Ahsan.

Jeetu explains to Viaan that even though he never takes sides, but he can't help but think about Katha's resignation.

He requests Viaan to consider Katha's point of view as well before coming to a conclusion.

Ahsan signals Jeetu to leave and then says to Viaan that he has also decided something as his business partner and then leaves the office.

Meanwhile, Katha and the nurses take Aarav to the operating theatre.

Aarav confesses that he is too scared and begs Katha to take him back and not let him go through with the surgery.

Katha calms Aarav down and promises to stay by his side forever.

Katha watches Aarav when he goes to the OT and tears fill up in her eyes.

She then gets a call from Kailash who tells her that he is sorry for everything he has done and is ready to help Aarav in any way possible.

Katha who is overwhelmed with emotions snaps at him and says that he is too late to offer help as she has somehow arranged money for his surgery.

She tells him that she and her son will survive without his help and then hangs up the call.