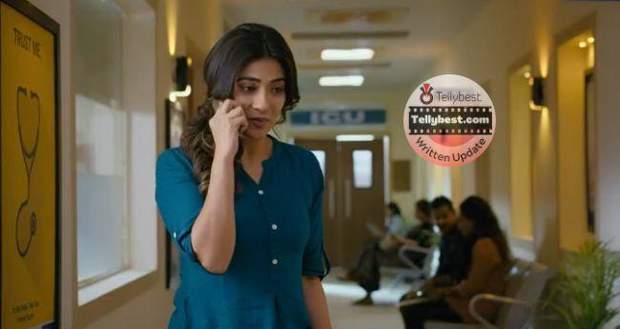 Vian wonders where did 1 Cr go?

However, before Viaan can say anything more, Katha stutteringly says that since Viaan is right there so the changes can be done to the project.

She even tells Viaan that she will go home now and walks away.

After Katha walks away, Viaan mutters that neither Katha’s clothing has changed nor her simple lifestyle and she even uses that old broken phone with a look of curiosity.

Unable to comprehend Katha’s need, Viaan asks why Katha needed one crore rupee from him if her lifestyle is not changed.

Meanwhile, Katha reaches the hospital only after Arav has gone to sleep.

Noticing Katha, Falguni joyfully tells her how Arav declined to fall asleep as he wanted Katha to draw more dreams in the scrapbook but now he is sleeping peacefully while Katha ruffles Arav’s hair lovingly.

In reply, Katha informs Falguni that she is feeling guilty for not arriving sooner.

Falguni urges Katha not to feel guilty all time but Katha replies that she got late due to office work and dropping Lolipop home hence she is feeling guilty now.

Hearing this, Falguni reminds Katha about how they used to think Arav does not have much time but now Katha has given him a long life to live.

Further, Falguni announces it does not matter if Katha gets late on some days as Katha now can ruffle Arav’s hair every day to make him fall asleep.

Falguni even asks Katha what she calls him to which Katha replies Macho Monkey man with a smile.

Afterward, Falguni walks away and Katha whispers “I love you” to Arav with love in her eyes after removing the scrapbook from his grip.

While Katha gives Arav a forehead kiss, Amit enters the room and tells Katha that she has come now.

Before Katha can ask how he knows, Amit tells her that Arav always praises Katha for being hard-working.

Amit even informs Katha that Arav is very brave just like her and the medicines work better when the patient gets love and care.

He further advises Katha to manage some time for herself and Katha replies that she will talk to her bosses tomorrow.

The next morning, during the meeting at Earthcon, Viaan asks Katha how much time she needs to finish the project to which Katha replies that she will be done with the project in seven days.

Hearing this, Viaan tells Katha that she needs to finish the work in two days as the client will so far give only two and a half days to finish while Ehsan rolls his eyes.

Ehsan tells Viaan that this time looks impossible but Viaan announces that it is not impossible if everyone works together.

Viaan announces that if everyone works sixteen hours he will work sixty hours but the project needs to be finished on time since the Dubai project is big for the company.

Afterward, standing behind Katha’s chair, Viaan announces that everyone needs to communicate with each other for the project with authority in his voice.

Holding his gaze on Katha, Viaan announces she has two and a half days and walks away.

After Viaan leaves, Ehsan urges Katha not to burn herself with work but Katha firmly announces that she will finish it within time.

Later, Katha gets a call from Falguni who asks her if she will come to the hospital in the evening since she needs to go home.

Letting out her frustration, Katha informs her that she has to finish a project within two and a half days but she will manage.

Falguni, however, tells Katha that working is weird as they always need to take permission from the boss to go home but Katha replies that she will come to go the hospital without telling anyone as her boss is taking her for granted which makes Falguni happy.

Later, Ehsan scolds Viaan for pushing Katha so hard but Viaan defends himself by saying that he will do this with any other employee.

Hearing Ehsan taking Katha's side, Viaan asks him if he likes Katha and Ehsan replies maybe but orders Viaan not to bother about it.

Meanwhile, Katha is working day - night nonstop to finish the work on deadline, and in the morning spends some time with Arav playing.

Later that day, Viaan feels a pang of jealousy seeing Katha and Ehsan laughing with each other and when he offers coffee to Katha she rejects it.

The next day, Katha gives the finished project to Viaan mentioning it is done within the time limit and when Viaan stands up to ask something, Katha tells him that they promised not to talk about it that night.

However, Viaan announces that he wants to know why Katha refused the money from Pyramid which makes Katha close her mouth.

© Copyright tellybest.com, 2022, 2023. All Rights Reserved. Unauthorized use and/or duplication of any material from tellybest.com without written permission is strictly prohibited.
Cached Saved on: Wednesday 25th of January 2023 09:27:14 AMCached Disp on: Tuesday 31st of January 2023 07:57:37 PM