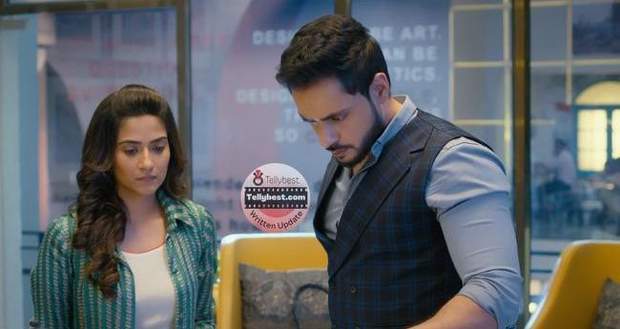 Today's Katha Ankahee 5th January 2023 episode starts with Katha telling Viaan that she has completed her work in 2 and a half days and she does not need to comply with Viaan’s rules anymore.

Viaan straightforwardly asks Katha why she did not take money from the pyramid to which Katha asks him why he minds things like that.

Katha answers Viaan that she cares for their employees and designers and that whatever she did with that money should not bother him.

Viaan tries to explain to Katha that he is just concerned about why Katha wanted such a specific amount and why she returned him the rest of the 83 thousand rupees.

Without any efforts to justify herself, Katha tells Viaan that she is very greedy and has invested in stocks to make more money in the future.

As Viaan gets silent, Katha walks out of his cabin and goes to the hospital to meet Aarav.

Viaan tells himself that he is trying to understand Katha's point of view but she is blocking him every time.

Katha and Rewa decorate Aarav’s room with balloons and ribbons and surprise him as he wakes up from his sleep.

Aarav asks them what special day it is and says that his memory has gotten weaker due to medicines.

Katha wishes a “happy new zindagi” to her son and gives a warm hug to him.

Rewa tells Aarav that she has shortlisted a great pizza place and demands he takes her on a date there.

Aarav commits to taking Rewa on a date but says that she has to pay the bill.

All the employees call Aarav and congratulate him on a successful surgery and exchange warm words with him.

Katha gifts Aarav a sports watch which lightens up his face with an innocent smile.

Aarav asks Katha to take care of herself and points out the old bag that she always carries.

As Katha tries to cover up the matter by saying that she likes that bag very much, Aarav says that she spent all her money on him and has nothing left.

After Rewa leaves for Singapore, Neerja enters the room and checks on Aarav about how he is doing after the surgery.

Katha tells Aarav that they will have a party together later at night to celebrate Aarav’s recovery from cancer.

Neerja gets a bit upset as Aarav asks her where her children are but soon smiles hearing Aarav call her “Dodo” (Doctor Donor).

With the promise to come back soon, Katha leaves the hospital when she receives a call from Kavita who asks her how Aarav is doing.

Katha decides to bury past things and happily asks Kavita to visit her grandson anytime at the hospital.

Later, Jenny informs Katha about the official dinner party the following night which shocks her.

Katha comes to Ehsaan and Viaan to ask if she can skip the dinner party but Viaan refuses as the party is also a part of their official connections with the clients.

Ehsaan also insists Katha come to the dinner as they want to introduce their project head to everyone.

Katha says yes and joins them at the dinner party while Aarav waits at the hospital with Neerja and Falguni.

Neerja says that they will party together after plugging in headphones so that no noise is heard.

Aarav stares at the door with hopeful eyes and says that he wants his mother with him.

At the same time, Viaan notices Katha distracted on her mobile as she messages Falguni that she will be a bit late.

Katha excuses herself for a bit but Viaan stops her and asks her where she is going.