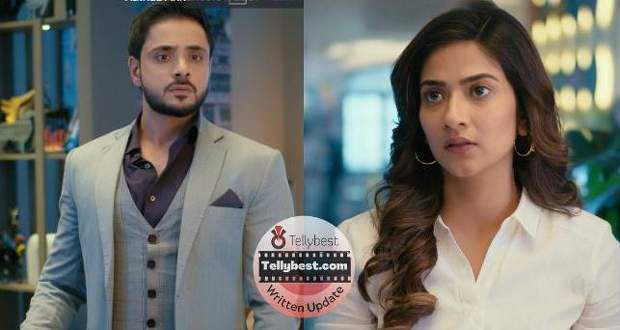 Today's Katha Ankahee 6th January 2023 episode starts with Katha getting nervous as Falguni does not reply to her messages and deciding to go out of the room for a moment.

Katha excuses herself but gets interrupted by Viaan who asks her where she is going.

Viaan gets silent as Katha answers that she is going to the restroom and asks his permission in doing so.

Meanwhile, Kavita comes to meet Aarav at the hospital and checks on him with a cheerful smile on her face.

Aarav tells Kavita that he is waiting for Katha to come as he wants to party with her but there is no sign of her till now.

As Kavita asks Falguni and Neerja to call Katha, they tell her not to disturb Katha as she is stuck in her job-related work.

Aarav hears Falguni’s words and starts crying as he wants Katha to spend his special day with him.

While crying, Aarav starts to hyperventilate which scares Kavita to a huge extent and she starts panicking.

Neerja asks Kavita to control herself but Kavita shouts for the doctor inside the room.

The nurse comes along with Dr. Amit who checks Aarav and asks the family members to go outside.

Neerja strictly asks Kavita to stop panicking and assures her that nothing serious has happened to Aarav and everything is all right.

Dr. Amit comes out of the room after injecting a needle into Aarav and assures everyone that Aarav just underwent an anxiety attack.

As Dr. Amit explains to Kavita that her panicking can cause a lot of damage to Aarav, Kavita apologizes for behaving in such a manner.

At the same time, Katha continuously calls Falguni and gets stressed as no one picks it up.

Viaan comes after Katha and spots her calling someone instead of going to the restroom.

Falguni picks up Katha’s call and tells her that Aarav is sleeping so that she does not get worried.

As Katha turns around after hanging up, she spots Viaan standing who gets awkward and walks toward the restroom.

Later, Ehsaan talks about their new project in Jaipur and announces that Katha will be the new project head of that project.

Katha gets a bit surprised as Ehsaan asks her to visit the site with him after 3 days.

However, Viaan interrupts Ehsaan and says that Katha will be going to Dubai with him after 3 days as the client wants to meet her.

Katha asks Viaan if she can manage things on a video call to which Viaan refuses and says that it is a short business trip of 1 day and 1 night.

After the clients leave, Katha sarcastically asks permission from Viaan to go home as he agreed to the trip without informing her.

Ehsaan asks Viaan when he fixed the trip as he was not aware of it to which Viaan says that he talked with them earlier.

On the other hand, Kavita confronts Kailash who gets angry at her for visiting Aarav as Katha turned him down when he agreed to help her.

Even though Kavita tries to convince Kailash to visit Aarav sometimes, he tells her to stay there instead of coming back.

Katha reaches the hospital and finds Aarav still awake as he was waiting for her.

Aarav asks Katha for the surprise as Neerja told him that people bring surprises when they are late.

As Katha thinks about the surprise, Aarav says that her presence is a surprise in itself and thanks her for regulating the trust that she will come, even if it’s late.

Aarav gifts Katha a monkey plushie and asks her to adore it as he will get busy with school soon.

At the same time, Viaan gets annoyed as his mother Farah asks him to get a life partner who will care for him and love her.

As Farah raises the topic of Viraj, Viaan gets angry and asks her why she thinks that he is like his father who cheated on his wife.

Farah gets offended while Viaan regrets his words and says that he is like his father in a way, no matter how much he denies it.

© Copyright tellybest.com, 2022, 2023. All Rights Reserved. Unauthorized use and/or duplication of any material from tellybest.com without written permission is strictly prohibited.
Cached Saved on: Wednesday 25th of January 2023 08:55:32 AMCached Disp on: Thursday 9th of February 2023 05:57:16 AM