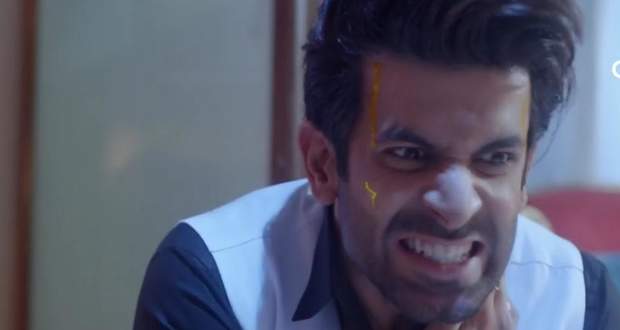 Today's Kawach 2 14 Sep episode starts with Roohi coming in her room along with other family members to show the creature. The family members find nothing in the room but Sandhya also feels weird.

Sandhya leaves the Prasad for Angad while his hand’s burn touching it. Later, Angad’s friend Vishal again comes to teach Prem and enquires about Suraksha Chakra.

Vishal tries to kill Roohi but later says he was just joking. Roohi asks him to stay the night so he can understand what they go through.

Prem sees some nail marks on a table and gets scared. He informs Angad who gets a shock after touching them.

He tells Roohi to send Rekha and Sandhya to find out about the marks. Rekha touches the marks to find out who made them.

She gets in a dark room and is attacked by someone wearing a hood. She tells the spirit is very powerful and is in the house.

She further says he might be inside anyone amongst them and says they will give Gangajal to everyone and have to go in the temple.

Angad’s eyes turn yellow and he is the one possessed. He is about to drink Gangajal when the Chakras start shining and their door gets open.

Angad drinks the Gangajal and is fine but Rekha starts suffering from cough and pain. Angad has tricked everyone in believing Rekha is possessed.

Later, Sandhya locks Rekha in a room and calls doctor and Panditji for her help. Meanwhile, Bhau attacks the Pandits and kills them.

Angad again gets a fit of pain while Sandhya wants to find out who is possessed.

© Copyright tellybest.com, 2018 & 2019. All Rights Reserved. Unauthorized use and/or duplication of this material without written permission from tellybest.com is strictly prohibited.
Cached Saved on: Friday 31st of January 2020 04:57:14 AMCached Disp on: Saturday 22nd of February 2020 09:12:50 AM