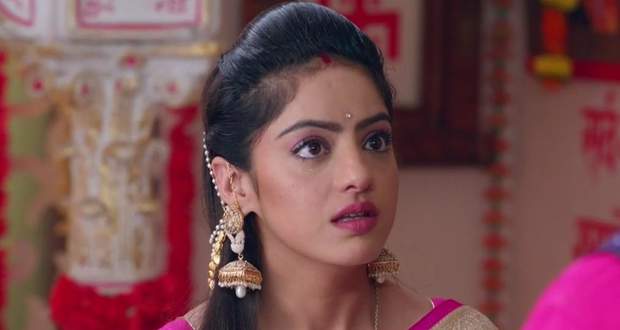 Today's Kawach 2 17 Aug episode starts with Sandhya wondering if Jolly can help her find out the reason behind Saakshi hating her. Meanwhile, Kartik doesn’t want Shobha to go to her house because of Prem.

Sandhya brings the cake for Prem in the room to make him happy. She also dresses like a Joker to entertain him but Saakshi comes to scare him again.

Later, Aastha comes in Prem’s room and wonders how a car is moving on its own. Saakshi comes to meet Aastha and tells her to be friends with her.

She also tells her to keep it a secret or else her mother will face problems. Meanwhile, Rekha (a psychic) draws the nameplate of Sandhya’s house and decides to go there.

Saakshi asks Aastha to play a game with her in Prem’s room. Meanwhile, Panditji informs that there is some evil spirit in the house.

Saakshi uses her powers to make Aastha fly in the air. (tellybest.com) Aastha gets scared and everybody else is searching for Aastha. They find her lying on the floor in Prem’s room.

Angad gets mad at Prem and Sandhya. Later, the Pooja starts and Saakshi starts to disappear. Prem comes and puts water in Hawan fire.

Malini gets angry and locks Prem in a room. Saakshi pushes Malini down the stairs while Malini thinks Sandhya did it.

Rekha comes to meet Angad’s family but Angad tells the security guard not to disturb him. At the same time, Sandhya gets upset as Angad is also against her.

Upcoming Kavach season 2 episode update: Rekha will enter in the party to inform Sandhya about Aastha being in danger.