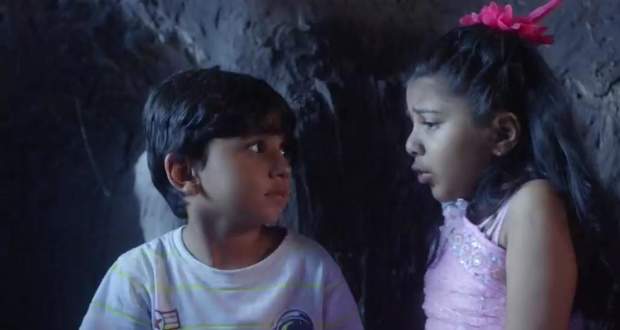 Today's Kawach 2 18 Aug episode starts with Angad telling Sandhya that Prem might be the reason for ending their relationship. Meanwhile, Shobha decides to go to her mother’s house for her delivery.

Aastha prays to god for solving their parent’s fight and at the same time, Saakshi comes and tells her some way to solve her parent’s differences.

Rekha interprets through her powers that at 7.30 someone will die in Jindal house. At the same time, Jindals are celebrating Aastha’s birthday party.

Aastha goes into an empty room as told by Saakshi for solving her parent’s fight. Saakshi sends in black smoke to kill Aastha.

Meanwhile, Rekha sneaks into the party to warn the family members. At the same time, some kids open Prem’s room and get scared by him.

Prem attacks the guests and everyone decide to leave. Family members start searching for Aastha while Aastha is still trapped in the darkroom.

Later, Rekha tells Sandhya to save her daughter who is trapped in a storeroom. She finds her unconscious in the room.

Aastha gets conscious and tries to tell about Saakshi. At the same time, the lights go off and when light switches on Aastha and Prem are missing.

Saakshi has taken both the kids with her. Meanwhile, Rekha tells everything to Sandhya and Angad. She shows them the sketch of Saakshi.

Angad apologizes to Sandhya for not understanding the hardships Prem has went through. Rekha proposes to bring Saakshi’s soul in her body.

Saakshi comes in Rekha’s body while Prem and Aastha decide to escape from the cave.

Upcoming Kavach season 2 episode update: Saakshi warns Sandhya that she will snatch her daughter away.

© Copyright tellybest.com, 2018 & 2019. All Rights Reserved. Unauthorized use and/or duplication of this material without written permission from tellybest.com is strictly prohibited.
Cached Saved on: Tuesday 14th of July 2020 04:32:58 PM